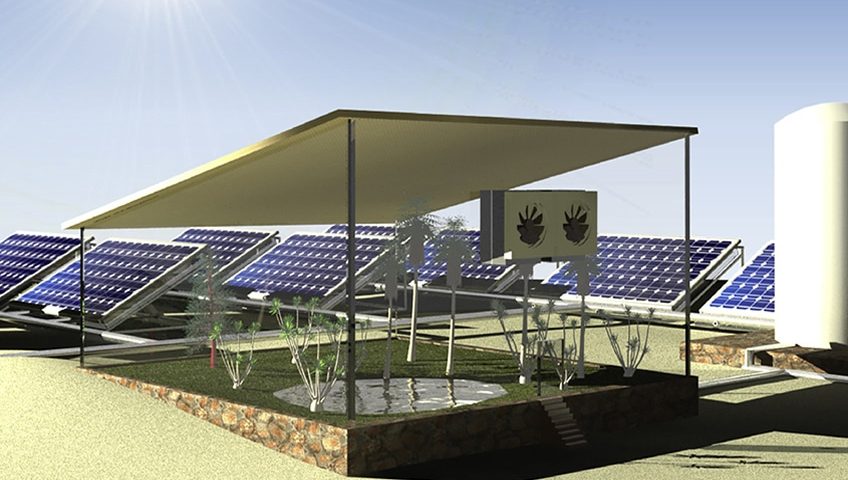 Did you know there are 12,900 billion tons of water within the atmosphere – in the air?

Did you know that solar panels don’t like heat and work better when they are cool?

W hat if you able to use the sun to make electricity from solar panels, then make them more efficient from the cooling effect of water extracted from a process that uses waste energy from the panels themselves? What about if we could use that water to help grow crops? This article gives insight to the work of some bright researchers in Saudi Arabia.

Employing a special hydrogel, scientists in Saudi Arabia have devised a solar-driven process that has been able to grow crops (spinach), produce water and electricity. It uses water extracted from the air that uses waste heat energy drawn from solar PV panels. The proof of concept was published by the science journal, Cell Reports Physical Science on March 1, 2022. The aim is to provide a low-cost and sustainable strategy to provide food and water to those living in arid climates.

Here’s the process in brief:

Water cooling increased power production by 9.9% over a 3-month trial in Saudi Arabia. The extracted water was also used to irrigate crops – water spinach with a 95% survival rate.

Senior author of the research paper is Peng Wang, a professor of environmental science and engineering at the King Abdullah University of Science and Technology (KAUST). He says that most of the world’s population living in rural and arid areas still do not have any clean water or access to power. However, using their design, clean energy and water can be harvested and created to give these people a way to improve their conditions.

As mentioned earlier, the system is known as WEC²P. This is where a solar PV panel is positioned above and in contact with a layer of hydrogel, which in turn is placed upon metal enclosure, that acts as a condenser to collect harvested water. This hydrogel is the product of prior research that can in effect, absorb water vapour from ambient air which can release the captured water when the material is heated.

There is a two-fold effect.

The waste heat from the solar PV panels is the energy source that is used to heat up the hydrogel so that water captured within it is released in the form of a vapour, which is then condensed when in contact with the metal box enclosure. As the water in essence evaporates from the hydrogel, a cooling effect is generated, that in turn lowers the temperature of the solar PV panels that are in direct contact with it. The team saw that an operating temperature drop of around 10% was achieved using this technique.

The test was held over a three-month period in Saudi Arabia, but the plant growing part of the test was held for two weeks in June when the weather was extremely hot. The researchers only used water collected from the test unit, to irrigate 60 water spinach plants. Out of those, 57 survived and grew to a normal height of about 18cms. There were three sets of 30cm x 60cm solar panels.

Each solar panel setup within the test produced about 3.4 litres over a 30-day period. The power generated during this time was a total of 1519 watt hours.