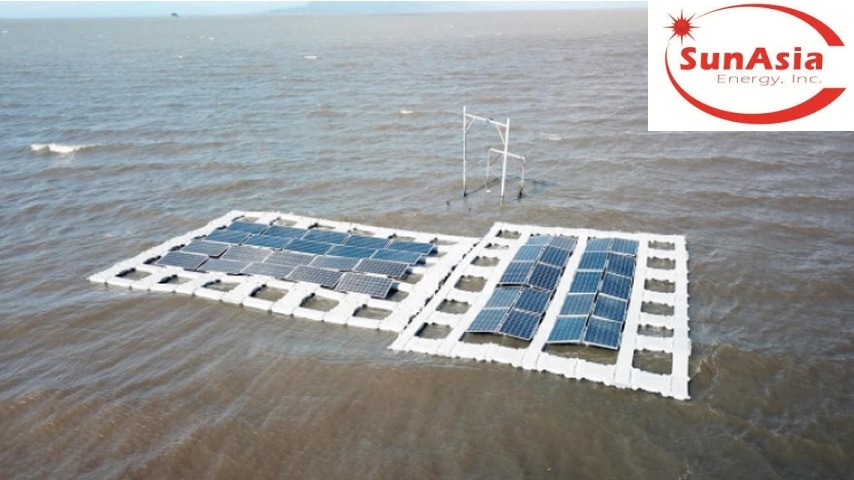 S unAsia Energy, a Filipino firm is banking on technology and engineering to help it make solar PV power on water. They are building the test rig on the third biggest lake in South East Asia, which is in the Philippines. They are going to screw pile the FPV or ‘floating solar test bed”, into the lake bed. So it’s not going anywhere...

Laguna Lake is on the north island of Luzon. It is 55 kms south of Makati City, part of Manilla.

So, with good design and materials they won’t need any luck. That is if the platform is going to survive the 20 or so storms that lash the area each year. It’s going to

have to sit through typhoons as well, and still make power the next day. That is a big ask, but they feel they can do it.

SunAsia is a renewable energy developer, and is working with their off shoot, NorteSol Energy. They have just finished the first part of the trial 20.5kW floating PV solar platform. They are using Trina panels at the moment, but will be trying out others too in the next phase.

SunAsia’s President, Theresa Capellan says that they will be reporting the results of the tests in June, 2019. She says the company is confident that it will work, and will up scale to utility level once it does.

Laguna Lake covers about 95,000 hectares and straddles several urban areas too. In December, 2018, NorteSol Energy inked a deal with the Laguna Lake Development Authority (LLDA) to do a pilot run. They want to see how it will work in operation and assess the engineering aspects. But they especially want to see how it copes from June to September, which is the typhoon season.

If such a project is to have any hope of withstanding a typhoon, it will need to be well anchored. Other FPV’s have had bolts joining them on the surface, like some in Taiwan and Japan. However, the engineers are expecting worse weather conditions so have opted to chain the rig to the lake bottom.

Capellan said that one of the best aspects of floating solar is the cooling effect it has on water. In Vietnam and Singapore in fact, they found that in summer, evaporation went down and oxygen levels went up. This in turn helped zooplankton to grow, and that gave fish a food source, and helped them breed.

SunAsia operates one of the biggest utility PV plants in Toledo, Cebu. While it has a unique microgrid system in San Jose del Monte, Bulacan too.