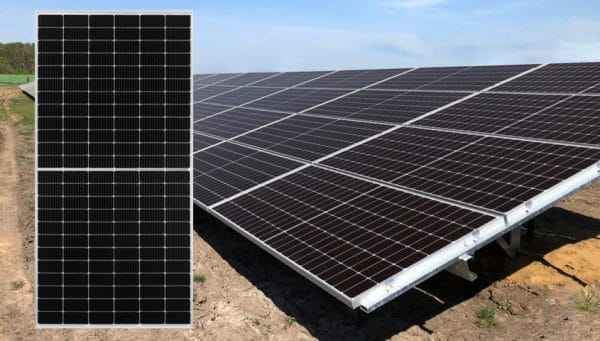 When people first hear the expression, they wouldn’t be blamed for thinking it was something really crazy. However, strange as it may be, if you take a solar cell and cut it in half, the two halves actually operate more efficiently! This approach is now being widely adopted by many of the worlds big panel makers, who are in a constant contest with each other, to produce higher performing solar cells.

If you go back in time about ten years or so ago, if you had solar panels installed on your roof, their ability to convert sunlight to electricity would have been an efficiency rating of around 15 to 19%. In that vicinity.

These days, you can easily find solar panels that convert upward of 20% of the incoming sunlight into electrical power. Right now, the best residential solar panels reach almost 23% efficiency. The upshot of this massive increase in efficiency from about 15% up to 22% means that, you would need around 40% less solar panels to achieve the same amount of power. That means you pay a lot less for installation and you don’t need as much roof space.

Cutting panels in half to increase efficiency?

Half-cut solar cells are one of the latest technologies to increase solar panel efficiency.

In many instances, a half-cut solar panel is around the same physical size as a standard solar panel. However, it uses solar cells that have been cut in half, and then electrically joined together in such a way that allows the panel to run more efficiently. This is especially in the shade. This means that, although a standard panel might have 60 cells, a half-cut panel will have twice the number -120 cells instead. Similarly, a traditional commercial panel (which are physically bigger), might have 72 cells, while a half-cut version of the same panel would have 144.

By now, this might seem totally crazy, that such a seemingly simple thing could actually result in a better solar panel, but there are in fact two ways that half-cut cells boost panel efficiency. We’ll explain how half-cut cells operate, but first let’s talk about standard, conventional solar panels.

Almost all solar panels on the market today are made with cells of one or two different types of crystalline silicon cells. There is mono-crystalline and poly-crystalline. Both of these types are produced differently from each other, and have specific advantages, but with either type, the production process begins with a solid block of silicon (an ingot), that is sliced very thinly into wafers, to create individual cells. 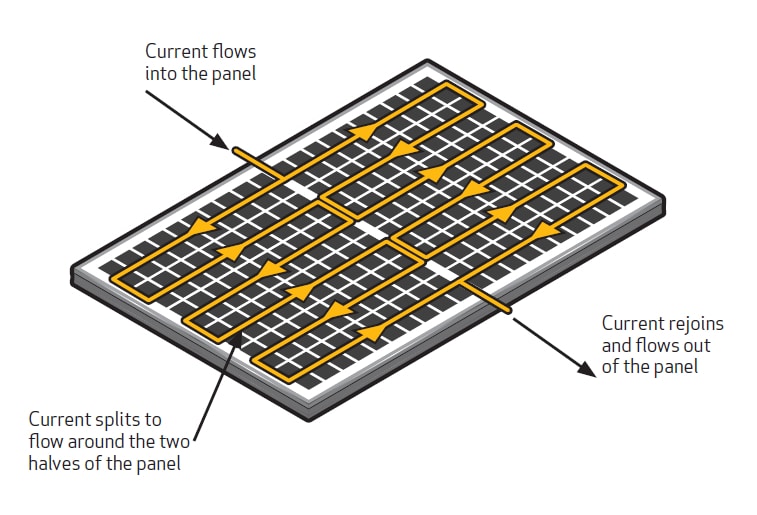 How do they make half-cut cells??

A solar panel is constructed of many individual solar cells that are connected together. Each of these cells produces a small voltage charge (approximately half a volt) and creates an electrical current, but when many cells are wired up together - like in the type of solar panel you might put on your roof - the combined output of all those small cells in total, could add up to as much as 60 volts and perhaps up to 400 watts.

Solar cells come in a variety of different sizes. A common size is 150mm square. This is the size of cell found in many solar panels, 60 cells for residential panels, and 72 for the physically larger commercial panels, generally speaking.

There are some panel makers that use designs that carry more cells. SunPower uses a different approach, and cuts their cells to allow 96 on each of their current residential panels. Some panel makers are moving to an even larger cell size in an effort to potentially lower manufacturing costs further.

The manufacturing process of half-cut solar cells, is initially the same, with the solar cells still being produced to a conventional size, such as a 150mm square. The next part of the process is to cut the cells in two or thirds, depending on what’s required. This is done with a laser or a diamond wire saw. The cut cells might now be 150mm x 75mm rather than 150mm square. So instead of a completed solar panel having 60 cells, it now might have 120 on board.

Does a half-cut solar panel look any different to others?

Yes, the overall size of a solar panel with half-cut cells is generally the same. But the individual cells are obviously a lot smaller (ie. half the size). The actual spacing between the cells is reduced as well. Probably the single most noticeable difference is a distinct line right through the centre of the panel. 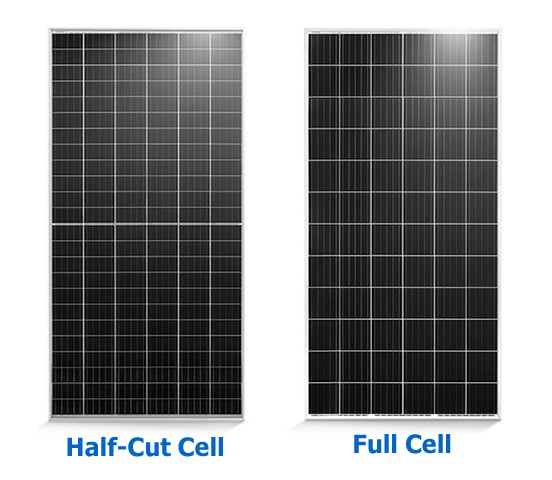 What are the advantages of half-cut cells?

Previously, we discussed about the extra manufacturing step of cutting the cells in half using a laser or a diamond wire saw. Not only does this add a bit more complexity, but also the cutting process has the potential to damage the cells, increasing wastage. With this in mind; is the extra involved with cutting the cells, etc. really worth doing? Yes, it is. There are two very good reasons, and both work together to improve overall panel efficiency.

You might recall from your school days, in science class, that electrical resistance goes up when current increases. If you’ve ever used an electric heater on the highest setting, you might have seen the heating element glow red hot. This is caused by electrical resistance.

However, if turned down to a lower power setting, everything reduces accordingly, less current draw, less heat, less resistance.

This is one aspect why half-cut cells enable more efficient solar panels. When a solar cell is half the size, it therefore has half the surface area in which to collect sunlight, and by doing so, it will produce only half the electric current of the original cell. Taking this further, now that the maximum electrical current has been halved, a half-cut solar cell will have 25% lower resistance than the original full-sized solar cell. Great.

With double the cells used to make a half-cut solar panel, this also doubles the total current output of the panel to the same level as one with full sized cells - except now a bit higher due to the better efficiency.

Now as the number of cells is doubled in a half-cut solar panel, if they were connected together in a traditional way, the voltage would be twice the amount now too, causing the panel to be incompatible with most inverters. The way around this is to wire the two halves of the panel in parallel, bringing the voltage down to the same level as a conventional panel.

We mentioned shade before. On standard panels, if one section of the panel is covered or shaded, the output of the entire panel is compromised. The way half-cut panels can work better than standard types where there is shade, is because essentially, they are two separate panels in one. One half of the panel may have shade affecting it while the other continues on at full output. This gives the half-cut panel better shade tolerance.

Even though most panels have features that help reduce this, there are certain situations where a half-cut panel is the best fit for the job.

Any other advantages of half-cut cells over the others?

Right now, there are other popular technologies in use that boost solar panel efficiency, they are PERC and heterojunction cells. In both cases they do have disadvantages. For instance, PERC cells that aren’t produced to a very high standard could suffer higher fail rates, and heterojunction cells definitely add to manufacturing intricacy.

In contrast, half-cut cells, don’t rely on overly sophisticated technologies. It’s a very simple premise that’s easy for panel producers to readily adopt and therefore many of them have! Many have incorporated half-cut technology into their existing array of products. Half-cut PERC cells are a very popular offering in the market at the moment.