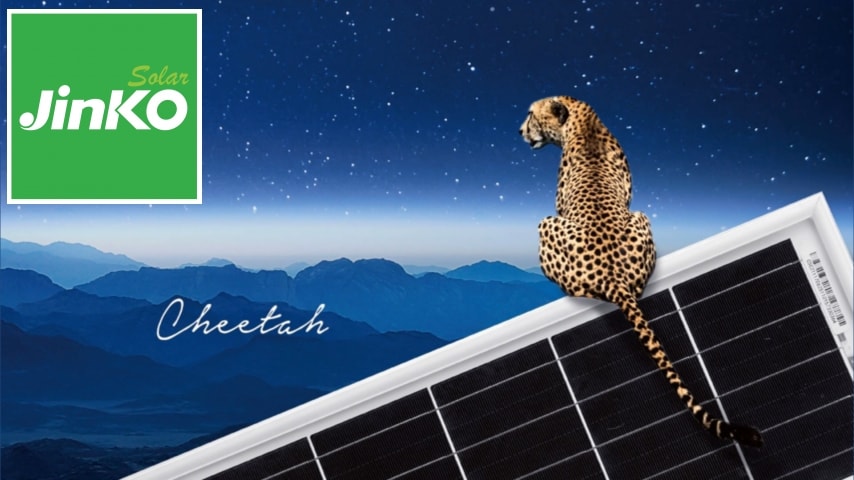 J inko is back in the news again with another record efficiency level for its mono PERC tech. They did this with their “half cut” Cheetah cell tech module, which scored a 24.38% efficiency level. And their ‘n type’ mono cell that got up to 24.58%. They were able to pull out a record 469.3 watts from a 72 cell module.

They did this with a mono panel with 158.75mm wafer cells on board. A few rivals have also gone with larger wafer sizes too, to get as much out of a solar panel. It appears that larger wafers will hold a great deal of attention in future. So it’s likely to become the new standard.

TÜV Rheinland did the testing. Jinko was also the holder of the previous record of 23.95% in May, 2018. The cell efficiencies for both have been verified by the Chinese Academy of Sciences.

By having a larger wafer, it has cut down the spaces or gaps between the cells on the panel. It gives better use of the available space on the panel. But 158.75mm is a big as they can go in effect, without making changes to their production lines.

A Cheetah cell is square, not like most others that have their corners clipped. So this gives it a bit more room to make more power. In fact it increases the active area on the cell by 1.21%. That may not appear much but it is when you’re trying get every last watt out of a panel.

With the advent of the Cheetah cell, Jinko has been able to make big strides in improving output and strength. The PVEL 2019 ‘PV Module Reliability Scorecard’, shows Jinko as a Top Performer every year since 2014. The testing regime was in fact even more severe than previous years too. So it has been a very good result for them.