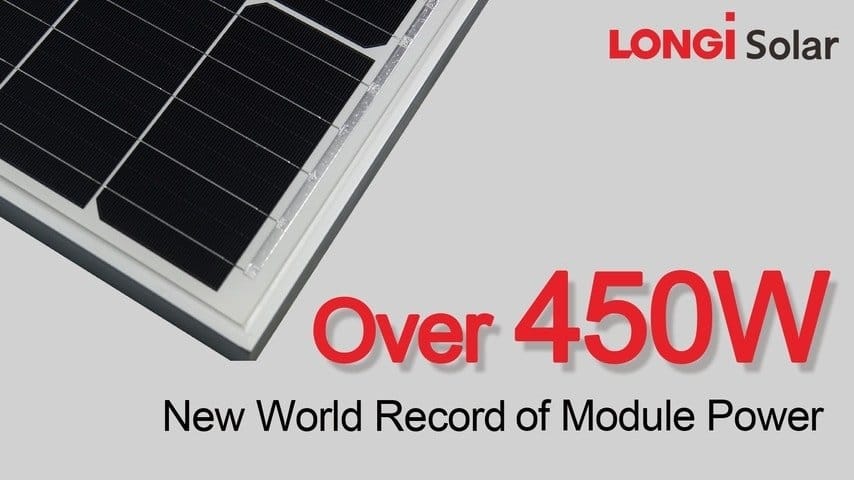 C hinese PV maker Longi Solar has exceeded 450 watts output on its 72 cell bifacial half cut monocrystalline PERC panel. That's a bit of a mouthful, but being a “bifacial” panel means that it has “two sides” or “two faces”. This result was reached from what we call the “front side”, so it is a very impressive result.

Briefly, what the above means is this:

Monocrystalline – these are cells that have a single, uniform shape or structure.

PERC – Tech waffle that is hard to make simple, but stands for “Passivated Emitter and Rear Contact”.

Half cut – This is a standard size cell that has been cut in two. It has less resistance and is more efficient.

Bifacial – this is a panel that makes power from light coming through the top glass, then hits its back surface.

The record was verified by the German agency TUV SUD and follows on from other records that Longi have attained. They made news in January 2019, when they

So by combining half cell, PERC and bifacial tech, a panel can make more out put by 5-10 watts. They work better in low light, and in shade, and get less “hot spots” on the panel. No specifications for this panel yet but being 72 cells, it would be about 2mts long by 1mt wide. That’s about the same as the existing 360 to 380 watt series, and likely weigh in at around 25kgs too. So, they’re not the same size as a standard panel which is about 1650mm long by 990mm wide.

After many years as a silicon wafer maker, Longi Solar has become a major player as a panel maker too. That started in 2014 when they bought up panel maker, Lerri and they stayed with the Lerri brand until 2017. At the moment (May 2019), we don’t know when these new 450 watt panels will be available.