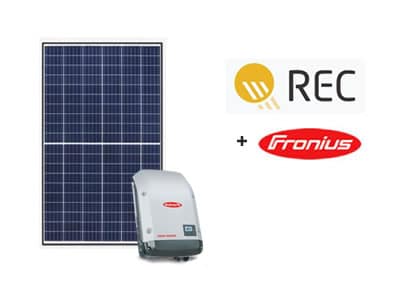 The Talk Is Big But The Panel is Real

Its head office is in Norway, but REC builds all its panels in Singapore. They make great Tier 1 panels, like the REC TwinPeak that also have a ten year warranty. They also have an office in Melbourne. Search for REC Solar Panels, and you will see there's also a firm in the USA with the same name.

2018 follows on also from a successful 2017, what a great list of achievements. Multiple records made - Quarter 4 shipments of 413 MW, totaling then 1.344 MW for the year, a 6% growth rate. Sales records smashed in important markets around the world, also here in Aussie. Record customer base growth rate also at nearly 80% from the start of 2016 to the end of 2017. Three wins for design, environment and technology, also Twin Peak sales reached 1 GW and four new panels launched too.

A bit more company history about REC, which in fact made its first poly crystalline wafer way back in 1997. Cheap hydro power also made them for a time - the world’s biggest maker of poly crystalline wafers. REC enjoyed a period of growth and also opened two new wafer plants in 2008 and another the next year. Money problems hurt the company so both factories closed in 2012. Around this time in 2010, REC also opened a new plant in Singapore, which is the main factory.

REC are in many markets around the world, however, they are a big brand in Europe. This helped along by anti-Chinese trade restrictions in the EU, these then don’t affect REC as it's a European firm.

TwinPeak 2 Technology No If's But More Watts Your Way.

REC TwinPeak Series come with a new design that also improves output. So enabling customers to get the most out of the space for the installation. REC TwinPeak 2 lifts the yield of poly crystalline panels higher as a result of its great twin panel format. The Twin Peak 2 panels also use laser cut poly silicon cells. These cells make then for higher panel efficiency. This in fact makes over 20 watts more power per panel than other poly crystalline types. This in turn also helps make the best use of available roof space.

REC Solar Panels Finally Come Out Of The Shade.

Due to the two sections, REC TwinPeak 2 panels offer better output where shade exists. When half of the solar panel is in the shade, the other half will still generate power.
Also this is not possible with normal modules where the potential power stops at the shade point. So these panels will produce power when other panels would completely shut down. These panels have then and efficiency of around 17.1%.
So why not get us to design and also install a great REC system for you?