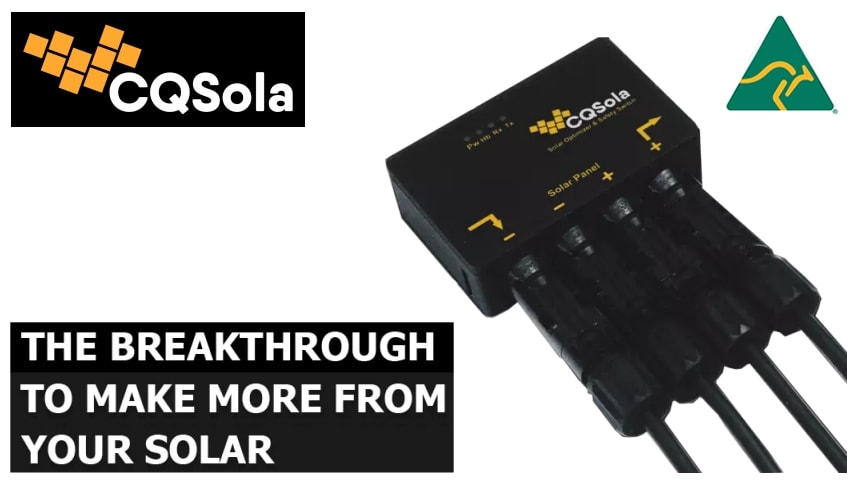 N ew local company CQSola, is offering pre-sales for their new Australian made DC optimiser. The firm's CEO is Mr Tony Schirmer. The product aims to tackle a nagging weakness found in most solar PV systems. According to claims by electrical regulators, perhaps up to 1 in 6 solar systems are ‘sub standard’. Worse, probably 1 in 30 are “unsafe”.

The issue relates to the high voltages of up to 600 volts found in many solar installations. The threat posed by this electrical beast is a problem that has lingered for years. CQSola believe they have the answer to not only this, but can also make your solar work better too. When an event occurs at a home or business equipped with their optimisers, they kick in, making the system safe.

In the case of a fire, the CQSola device will safely shutdown a solar system in a flash. So that’s 600V to 0V in a matter of milliseconds. As a rule, unless it is safe, fire fighters cannot use water on a fire involving a solar PV system. So this is the first big feature of the product. It could help both new and existing PV systems become compliant and safer. Especially those that have older cabling, that if damaged could present as a fire risk.

The second feature is the ability of the optimiser to increase the performance of systems affected by shading by 60%. This would relate to those systems that shade affects partially. So, in this case, they will see a big increase in output using these.

The system currently is the OS1000 DC panel optimiser and the SCOM600 communications unit. The optimiser has a rating of between 92.2 and 99.5% from input to output. This is a very high level indeed.

CQSola claim that their new DC Optimiser product is the first with many new features such as: - a conversion ratio from input to output of up to 99.5%; - a rapid adjusting MPPT that responds every 2 seconds instead of up to 15 minutes with others; - the system samples panel data every second and stores it even if it loses connection; - SIL2 Safety Rating means industry, military, government and solar farms can use this technology; - has passed standards for IP68 for heavy moisture and marine environments; - is on or off grid battery compatible; - 100% compatible with all solar inverters; - can render a high voltage PV solar electrically safe in seconds.