Solar Basics – Solar Panel Systems, What Are They? 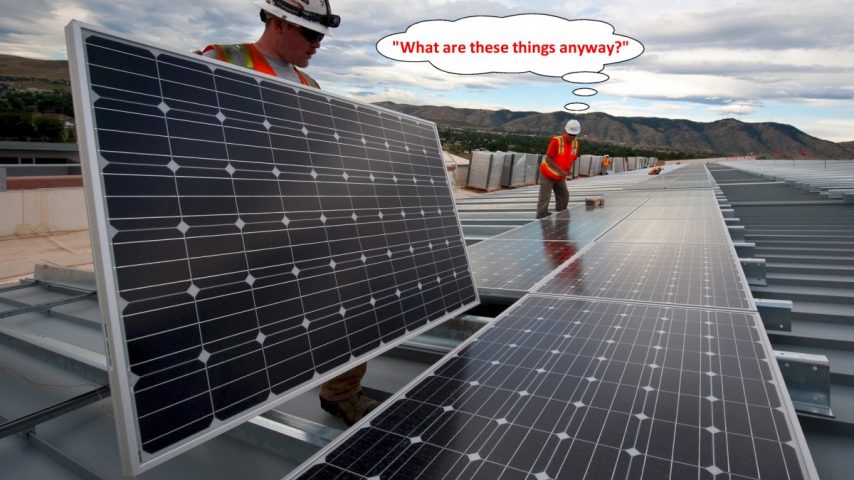 S o what is a solar panel? You know what they look like, and maybe have a clue of what they are, but what are they? This is a ‘non-tech’ brief. A solar panel is a collection of things we call “solar cells”, that they lay on a flat board. Amazingly, they make electricity when placed in sunlight.

They often call solar panels “modules” too. The power they make is “DC electricity”, which is like the power you get from an everyday, common battery. You know, the type you have been using to power toys, torches, calculators for years. It is not the same kind of power you get from your mains wall plug, we call that “AC”.

What is a Solar Panel Array?

When you put many panels in a group, all facing and angled the same way, we call that an “array”. But you can have more than one ‘array’. So that means you can have one array or group faced one way, and another pointing, a different way.

What is a Solar Power System?

And So What Is Photovoltaic?

Let’s try and say it first. Its pronounced, “FOTO VOL TAY ICK”
To explain as easy as we can, so it is when light turns into electricity. They call this the “photovoltaic effect”. Someone found out that when you put certain metals and compounds together in the sun, they made electricity. This is why you may see “PV” often used with solar panels, it is short for “PhotoVoltaic”.

How does a solar cell in a solar panel, work?

If you are not a tech person, then this could be a rough ride, so hold on. A solar panel is in fact a number of solar cells, often there is 60 or 72 of them. When sun light touches a cell, a reaction takes place. This is at the atomic level. The rays of light excite the electrons in the solar cell. Like when you use heat to boil water, the water is clearly, ‘excited’, yes? The water rushes to the top and goes off as steam. Well, with a solar cell, in a solar panel, the excited electrons rush to flow in a certain direction. It’s this ‘flow’ of electrons that creates the DC electricity or ‘current’.

OK, we have solar power now, what’s next?

There are then three basic ways your power can end up. You can then use the power in your home, sell it to the Grid or store it in a battery. Most people try to use the power their solar PV system makes. This is where the biggest savings are at the moment, so most do this. But many are now selling their excess power to the Grid and make money doing that. Of course, some are storing their left over power in a battery for use at night.

Yes and no. Yes, when solar panels are on your roof making power, they put out zero bad stuff. But, when they make solar panels they use a LOT of energy and put out a lot of CO². They are making big steps to reduce this, so at some time in the future, this will be less. To add to that, when they make solar panels, there is chemical pollution but this is less now too. So, there are some question marks over this aspect of PV solar, but not enough to stop you going solar.

Are solar panels actually worth getting?

Yes, they are for sure, if you want to save money or lower your CO² ‘footprint’. If you live in Aussie, you will know just how much they slug us for our power. A solar PV system is the answer to get off this rising cost spiral. The prices for systems have come down so much, and their effectiveness up, it’s unwise NOT to think about solar. There is also the STC ‘rebate’ too, that helps to make getting a system affordable. So even if you have to put your system on terms, it can still be a great deal.