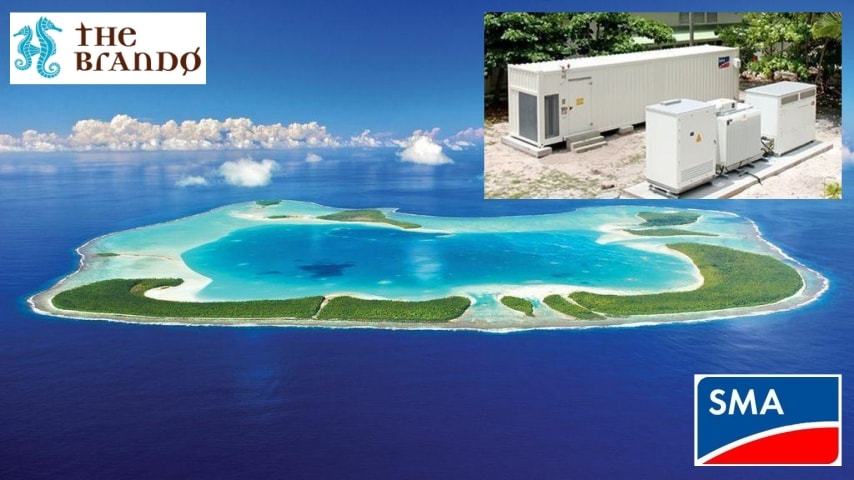 A ctor Marlon Brando thought to build a resort in Tahiti, but he did not want to rely on fossil fuels. However, it wasn’t until 2014 that it became a reality when the Brando Resort opened for guests. SMA played a major role in the project’s success to become sustainable.

The 1MW system will give the island about 60% of its needs, while saving 500,000 litres of diesel PA. As part of the works, they made the existing PV system along the airstrip twice as large, up to 1.4MW. The new solar PV pairs with a 2.6MW battery storage kit too, so the island’s power fully integrates. This has given the quality of power on the island a boost, making it stable.

The system SMA put in was a Sunny Central Storage and Inverter, that in fact forms a power grid. There is a hybrid controller too, that lets the network recover in milliseconds if there is an outage. The battery storage system in effect, acts as an uninterruptible power supply.

The operator of the resort is Pacific Beachcomber who are very happy with the result. Their CEO Mr Richard Bailey says that the system will help conserve a unique natural environment.

During the day, the resort’s power is from PV solar and the battery, while generators only start if needed. The system provides a constant power supply for the guests no matter the weather and at night. The resort also has a sea water air conditioning system too that in fact saves up to 90% of power. There are only two such systems in the world, and Pacific Beachcomer owns both.

The Brando resort is on Onetahi island which is in the Tetiaroa atoll in the South Pacific Ocean. Not far from the main island of Tahiti.

As many know, Marlon Brando was a famous Hollywood movie star, most know him as “The Godfather”. He fell in love with the area and bought the island in 1967, after filming “Mutiny On The Bounty”. Building the resort began in 2009, and took 5 years to construct, it also has an ecological station too. Marlon Brando who died in 2004, did not get to see the resort he inspired, but his spirit lives on.