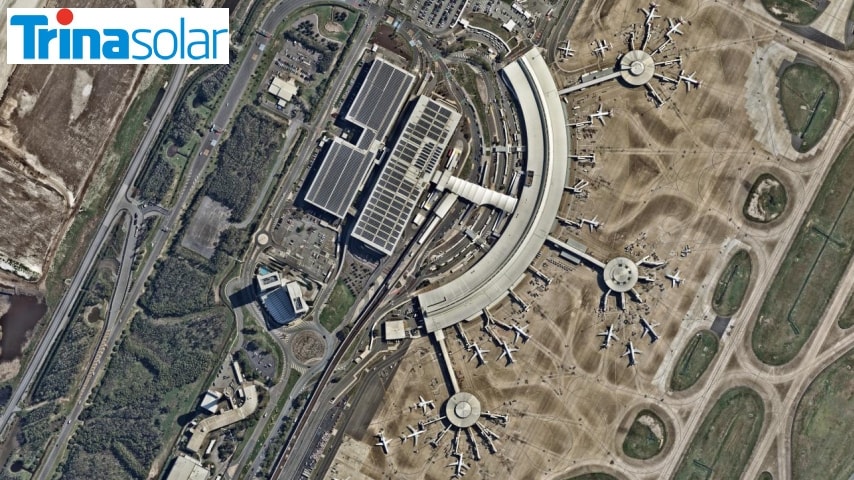 T rina Solar panels are now on the roof at Brisbane Airport, with a new 5.725MW solar system. It is in fact the largest solar install at an Australian airport so far. In total, 20,937 panels are in use on the project.

The system has actually been running since 2018, but the final checks now have all been done. Sydney firms Epho Commercial Solar Power and Shakra Energy worked to design and build the system. The system spreads across six sites, and is using Trina Solar panels on five of them.

The install is a mixture of panels on the roof and on the ground. It is a big project, in fact the panels would cover the area of two Melbourne Cricket Grounds. The contractor, Epho said it was their hardest project to date, but it will help them pick up other jobs. They have gained a lot of experience from the project, and especially in dealing with the authorities.

Airports often have "no go" areas , so getting access to various parts of a site can be tricky. There are safety concerns too, that don’t matter in other places, such as glare coming off the panels. This is in fact, a big feature of the Trina Solar Honey TSM-PD05 series panels. They have an anti glare coating that is ideal for this kind of situation. Trina Solar helped in the bidding process too, and their panels met the standards set by the aviation regulator.

Most airports have a lot of roof space and land area to put panels. They can still get the big savings from solar, though there are a few hurdles to jump. There is a global push by Airports Council International, for airports around the world to lower their carbon footprint. The energy usage at Brisbane Airport peaks during the day, the same time as the output from the new system.