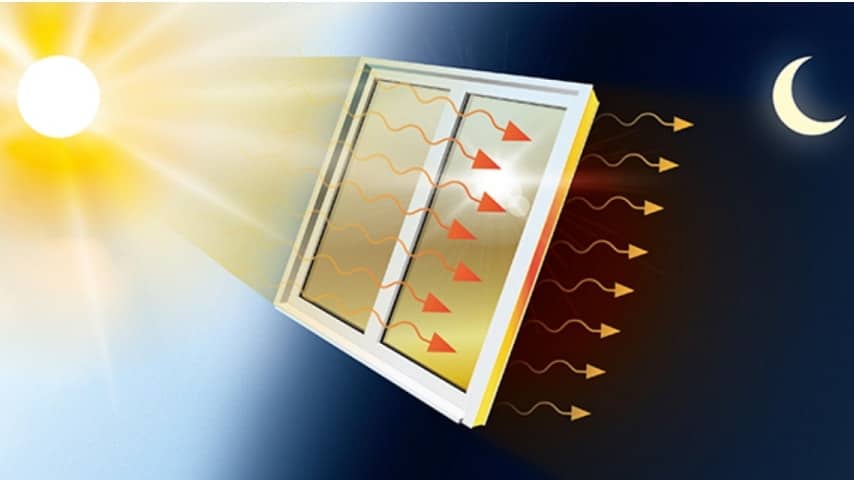 A light reactive molecule that stores the heat from sunlight and releases it gradually afterwards is on the way. Scientists want to use this in a window film that can help control the heat levels in buildings. A team of researchers at Chalmers University of Technology in Sweden believes they are very close to their goal.

The molecule’s capacity to grab energy from sunlight and gradually release it later as heat makes it unique. This means that it is possible to control and evenly distribute heat from morning to night. There are potentially big savings in the use of air conditioning in buildings. So using the heat itself provides a control mechanism that uses less of other energy to maintain comfort levels.

The idea has many other applications too such as in cars and in controlled environments, like greenhouses and livestock pens. The molecule structure actually changes when light touches it. When the Sun sets, the reaction reverses, and gives off heat for up to eight hours afterwards. The aim, says lead researcher and chemist, Kasper Moth-Poulsen is to make use of the free energy, not fight it.

Window blinds might have some effect, but would it not be better to enjoy the view while still in comfort?

The film with the molecule is a yellow orange but goes clear when it captures energy from sunlight. The molecule has a design to allow capture of blue green spectrum sunlight as it passes through. So light and heat going in is less, which it then releases, and the process repeats again the next day. The colour of the film changes back to yellow orange as it lets off the heat energy.

Office complexes and airports for example, can lower their power use while responding much faster to changes in temperature.

This special molecule is part of a concept the researchers call MOST, which means 'Molecular Solar Thermal Storage'. They had earlier unveiled this as part of an energy system for homes using the same technology. In that case the heat storage duration was to be much longer and could be used all year round. This would be perhaps from summer to winter to control the temperature in a home. That idea is still in the works, but they feel that the window film would be a better first step.

Right now, the team is enhancing the heat storing properties of the film, while getting the cost down. They are very close to reaching that target.