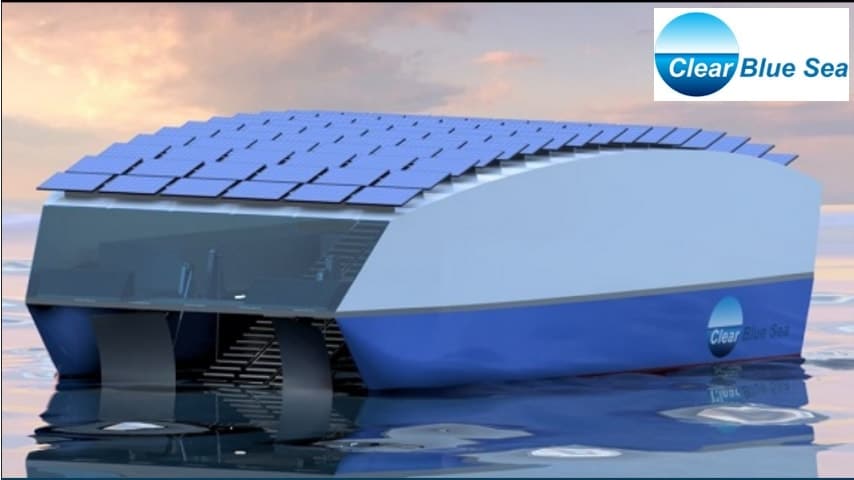 T he power of the Sun can now help us clean the oceans. FRED will pick up tonnes of junk that pose a threat to us all, but especially wild life. Students from the University of San Diego (USD), with funding by Clear Blue Sea, has successfully test launched their prototype. They are ready to go to the next phase and upscale the idea.

FRED is an acronym that stands for Floating Robot for the Elimination of Debris.

FRED is actually a robotic garbage collector that is atop a catamaran hull to keep it stable at sea. It is the melding of several existing technologies, that uses pollution free solar panels as the power source. FRED in fact started as a senior design project through another sponsor Clarity Design, Inc. Clear Blue Sea (CBS) is a non profit, is able to develop the robot with help from interns from USD .

FRED has the capacity to pick up floating debris from about 10mm up to 1m long. It uses a conveyor belt system to grab the floating junk and put it into internal hoppers. The robot travels at about 2 knots, a speed which the conveyor belts work best for picking up floating junk.

It has underwater “pingers” that warn marine animals of its presence. When FRED is full of rubbish it goes off to dock with the “Mother Ship” to unload. Any repairs that might be required are done at this time too. Its then back out to collect another load, and it can keep this up all day. The team is rolling out FRED in phases, and they are learning as the program goes along.

When the rubbish comes back to land, it then passes on for sustainable recycling. In foul weather, the robot goes into lock down, to protect itself and prevent the collected rubbish escaping.

At this time the prototype which is atop a pair of pontoons, and is only 1.2mts long. Full-scale FREDs will be about 15 times bigger than the prototype. It’s their hope to eventually deploy hundreds of them to areas around the USA and beyond. They envisage that the final unit that will gather up around 5 trillion pieces of floating garbage. They put its abilities to the test by using ping pong balls. It has been a great success so far passing all tests.

The final units will be completely autonomous and monitored by satellites. There will be cameras onboard too, the live feed will show the robot picking up rubbish in real time.

Tom Lupfer, a professor at USD, is also CEO and founder of Clarity Design, Inc. He says that we’ve got to solve this problem and that its getting more urgent every day. The longer plastic stays in the ocean, the more microplastic particles are likely to form. Which fish and animals then ingest, and in turn, then end up in our bodies too, as we eat them. A very unpleasant thought.

They hope to have a fleet of floating rubbish robots on garbage duty by 2025.