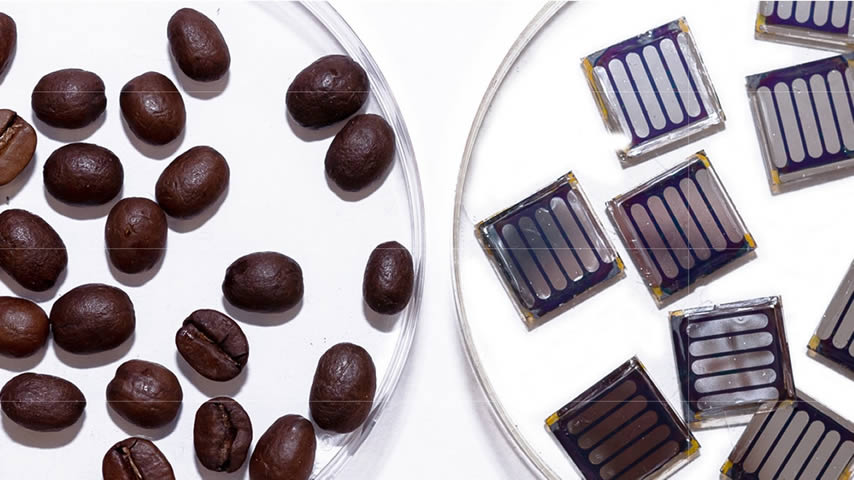 any know, Aussie firm GreatCell Solar based at Queanbeyan has been working to bring to market viable Perovskite solar cells. But over the in the US, research continues too, and a hunch on caffeine structure may bring Perovskite solar closer.

Funny things do happen but often when you least expect it. Well, discoveries can happen any time, and this one was over a cup of coffee. The chance finding may in fact see, silicon solar cells make way for ones made of Perovskite.

The clever coffee drinker is Rui Wang, a graduate student at the UCLA, in the US. In March 2018, while he was enjoying a cup, pondering the structure of caffeine, as you do. It was then that he came up with the idea that the chemical properties of caffeine could solve a problem. Perovskite’s main issue of not being able to endure heat, and sunlight causing it to be unstable and decay.

To his surprise, the tests worked, and have sparked a new quest to make the promise of Perovskite, a reality. It’s a breakthrough, as though many feel Perovskite is the future of PV solar, but its dogged by this problem. Of course the research has just begun, but it is a big step toward a solution. Perovskite looks good because of its low cost, and in fact its more efficient than silicon.

Its mentioned a lot lately, but what is Perovskite? It’s actually a mineral, and is similar in make up to iodine and lead, making it very cheap and accessible. So, if they can fix its instability issues, then it will cost less than silicon to make. And that is what everyone is hoping for.

Perovskite research first began in 2009 and gave yields of 3.8%, now it rivals silicon reaching 23.3% in December 2018. Its unique structure converts light to electricity very well, but it breaks down quickly, due to the heat and light. So, when they beat this problem, then it could be used in PV solar panels.