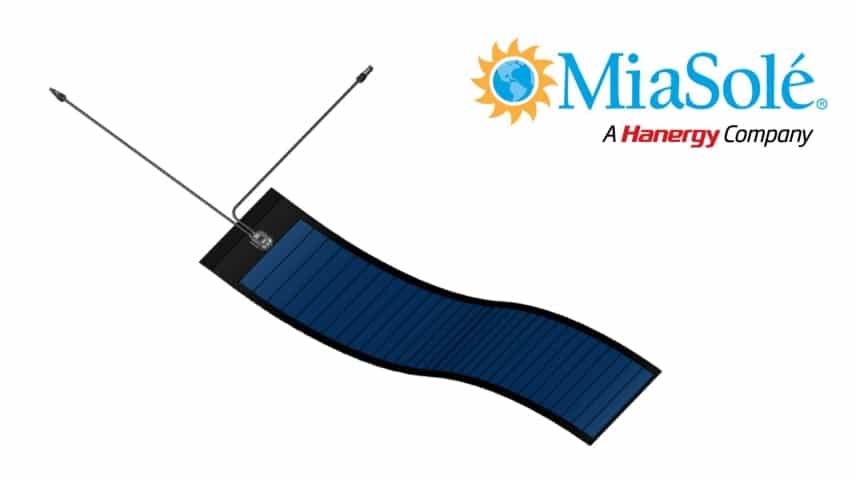 M iasolé Hi-Tech Corp, part of the Hanergy Thin Film Power Group, announced its recent success. They have been able to improve the output of their FLEX-03W solar module. In fact, it has jumped now by 10% to 540 watts. The panel itself weighs only 5.6kgs, and is 2.6mts x 1.3mts. It is also only 1.6mm thick, and boasts 18% efficiency.

The panel is based on Copper Indium Gallium Diselenide (CIGS). This is the thin film solar technology that continues to evolve to remain a serious contender in the solar industry.

The beauty of a flexible solar panel is that you can use it in places not suitable for solar. So, you can use them in any location, which may be on, or off grid. As this tech gets better, more and more opportunities pop up where there was not an option before. So, many manufacturers, are now building this tech into their products.

Mike Ma is the VP of Global Business Development at MiaSolé. He says that the product is the start of the next generation of “flexible solar technology”. And the push behind is the ongoing research that has given a nearly 10% increase in power. He made note of the fact that these flexible solar panels weigh 85% less than standard silicon glass panels. As mentioned, this means they can go in places that normal solar panels cant.

Miasolé has been steadily increasing their output every year and now their efficiency level stands at 18%. This is more than double what it was able to do previously.You can shape and configure the panels to suit many situations. You can fasten them to many surfaces by using peel and stick adhesive. They are very thin too - only 1.6mm thick, and can withstand high winds and geo seismic events.