Press REC To Get 380 Watts From Your Solar Panels 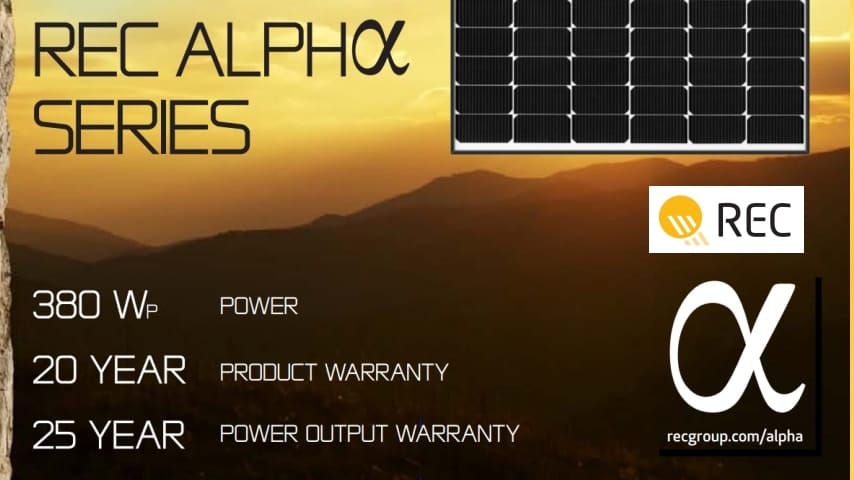 A t Intersolar Europe, the REC Group showed off its new Alpha Series 380 watt solar panel. This is now the most powerful 60 cell panel in the world. REC have got a patent over the panel design and its radical cell technology. If they can make enough of them at a good price, a lot of REC will be going on roofs.

REC’s CEO, Mr Steve O’Neil says that the Alpha is a completely fresh take on solar power generation. He’s right when he says its opens up a big power gap given what is on the market today. The firm just recently increased their standard product warranty on new panels to 20 years. Their performance guarantee remains the same at 25 years at 86% output. So it seems to me anyway, that REC are chasing the ‘solar crown’ after LG Solar and SunPower. QCELLS wont be far behind though, in fact there are a few big players in the hunt.

This panel is slightly bigger than a “standard” 60 cell panel (which is about 1650mm x 990mmx 35mm). But that shouldn’t worry too much as its not that much more, and should fit in about the same. The new REC panel is 1721mm x 1016mm x 30 mm, so it’s actually a bit thinner than most. Hopefully, it is still as rigid as other panels with thicker frames, LG and Sunpower both have 40-46mm frames.

The Alpha Series was born of REC’s lead in hetero junction cell and connection technology. Engineers from both Germany and Singapore have put it together using the firm’s half cut cell tech. It borrows from thin film design as well which works better at higher temperatures to give a better yield.

The panel will be available in two versions, a 380 watt white or a 375 watt black back sheet. So it’s not clear why there is a 5 watt difference between the two? The layout is the “Twin Panel” design that the firm released in 2014, that definitely works better in the shade. Since then many other panel makers have copied REC. The Alpha Series uses N Type mono wafers slipped between thin layers of amorphous silicon.

REC may not keep this advantage for long, but adding 20% more power for the same panel density is big. Whether REC can reap the gains will depend on the price, and whether they can keep up with demand.