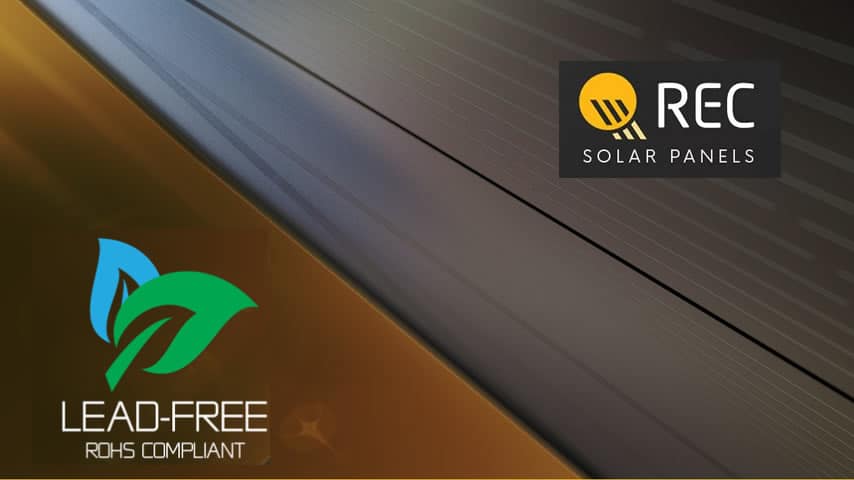 Though its head office is in Norway, REC builds all its panels in Singapore. They make great Tier 1 panels, like the REC Alpha Pure, N-Peak Series and REC Twin Peak 4 their latest, which we look into in this solar review. They also have a 25 years warranty and an office in Melbourne, Australia.

REC manufactures a variety of panels for residential and commercial applications using semi-cut PERC cells with a variety of available panel sizes and configurations. The new Alpha Series uses advanced HJT cells, while the N-peak series uses high quality N-type monocrystalline silicon cells for added all-round performance and reliability. The solar industry is moving towards more efficient cells, but REC is now leading the way in the development of HJT and N monocrystalline cells.

The Alpha Series is the latest panel from REC, arriving in early 2019. It has a capacity of up to 380W. There are 120 heterojunction cells that have been cut in half, that make up the actual solar panel.

It uses N-Type silicon, that give the panel a much lower degradation rate, and deals it with heat better than other solar panels using P-Type silicon too.

It can produce 217.14 watts per square meter, which makes the REC Alpha 380W, 26% higher in annual energy output compared to a usual 320W panel.

The REC Alpha is also solder-free, which aids panel life, by removing the possibility of cell damage from cracking. This also assists sustainability, as the solder free cell design reduces the lead content by 81%.

The REC Alpha Twin panel design is cut into two sections. This allows better energy production in shady conditions, and makes the most of the Sunlight. REC Solar says that after 25 years it will still produce 92% of its original output. This an industry leading score.

The Alpha series from REC is the first mass-produced heterojuncture (HJT) solar panel in half-cell format. HJT cells are constructed of high-purity N-type silicon base with a thin layer of amorphous silicon above and below the cell to further increase cell efficiency. HJT cells also have 16 microwire busbars that increase efficiency and provide exceptional performance at high temperatures with a very low efficiency coefficient 0.26% lower than the industry standard 0.38%. The short temperature coefficient means that Alpha panels will operate much closer to the highest rated power at high temperatures. 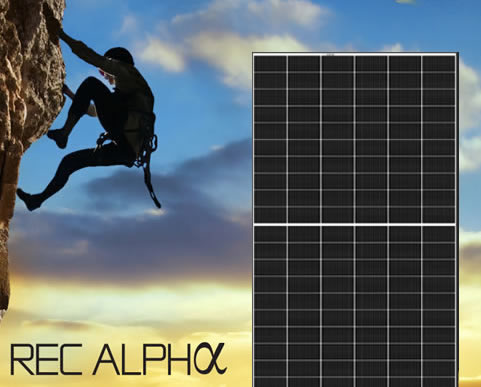 The panels feature a gapless layout, with half-cut heterojunctions. The 405-watt panels are reported to produce a remarkable 219 watts per square metre of panel. The panels build along the already successful patented “Twin Design”, split-cell and junction box technology that has been well received in the Market.

These panels are also part of the REC ProTrust Warranty program, that allows for 25-years cover over the actual product, labour and the performance of the panel. Guaranteed output from these panels is set at 92% over the 25-year warranty period.

As mentioned, these panels are lead-free in an effort to provide a more environmentally safer product. All solar panels generally contain small amounts of lead used in their manufacture. This becomes an issue when recycling panels on a large scale, as lead is toxic to the environment. The panels are still able to meet the rigorous European RoHS regulations, that is now a requirement for many electrical

products, even though solar panels are not yet listed. REC are a step ahead. Another clever feature is the “gapless” panel design. REC engineers have used as much of the available area on the panel to increase its efficiency, they have done this by reducing the spacing between components. By using this approach, they have been able to increase the number of cells to enhance output. The panels also feature a black back sheet that gives a view of uniformity to the eye. With the long warranty, and excellent production capacity, makes these panels very worthy of consideration. Great looking panels too! REC Twin Peak 4 Series of solar PV panels boast an advanced design with high power and efficiency, allowing system owners to get the very best from their roof space.

Together with the renowned reliability of a European brand and benchmark industry quality, makes the REC Twin Peak 4 Series panels, a winning combination that “ticks all the boxes” for commercial and residential rooftops alike around the world.

Taking it further, REC has developed its deep knowledge of half-cut cell technology, with p-type mono cells to new levels of power and efficiency. 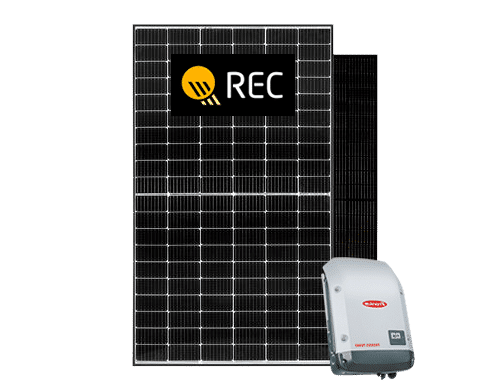 The REC N-Peak series is a 60-cell panel with output up to 330 watts. It has the most efficient crystalline cell technology in the industry. It gathers more sunlight providing more power.

One unique feature is the innovative “Twin” cell design layout. This is where the panel is basically split into two sections. This enhances its ability to operate in shady conditions.

When solar panels are first exposed to sunlight, they suffer from a slight loss in power output. This is called “LID” or Light Induced Degradation. This is the result of boron and oxygen elements reacting inside the panel structure. It results in a permanent drop of capacity. This is not the case with the REC N-Type panel!

The N-type technology in REC’s N-Peak cells prevents these two elements from combining, hence totally preventing LID. This is a major feature that means you always get the same power from the panel as the day it left the REC factory.

Most other solar panels have a strength and durability factor of around 5400 Pa. The REC N-Peak Series has extra support bars across the back of the panel, increasing this to a whopping 7000 Pa. This is exceptional for a panel with a 30mm frame height. 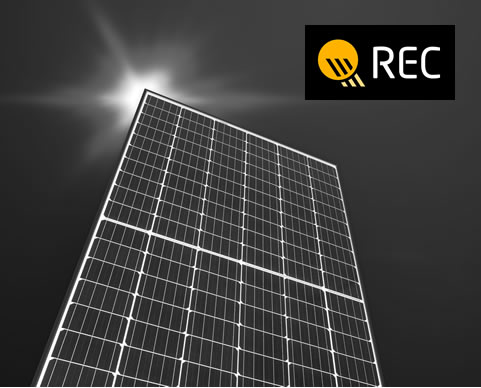 REC TwinPeak Series bring a new design that also increases output. This enables customers to get the most out of the space they have on their roof for solar. REC TwinPeak 2 raises the output of poly crystalline panels higher due to its famous twin panel format. The poly silicon cells on the Twin Peak 2 panels are laser cut too. This gives higher panel efficiency. In fact, this makes over 20 watts extra per panel than other poly type panels.

REC Solar Panels Come Out Of The Shade.

Due to the split sections on the panel, REC TwinPeak 2 panels have better output where shade is present. Even if half of the solar panel is shaded, the other half will still be making power.

Generally, this is not possible with other modules where power stops at the place where the panel is shaded. So these panels will still make power when other panels would totally shut down. The output efficiency of these panels is around 17.1%. 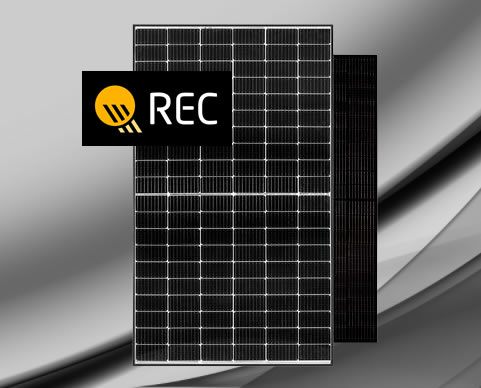 So How Did REC Solar Start?

REC is short for the Renewable Energy Corporation (REC). Founded in Norway by Bluestar Investments in 1996, REC makes its panels in Singapore. Constant growth has pushed REC now to 19th on the Bloomberg Tier 1 manufacturers list. Globally, REC panels have generated over 5GW of power, they also have an office in Australia too. Also, these panels are made in Singapore, not China.

The company has been in solar for quite a while. REC produced its first silicon wafer back in 1997.

It opened two new wafer plants in 2008 and followed by another the next year. Some problems arose that caused the company to close both plants in 2012. The company regrouped to the main manufacturing plant that was opened in Singapore in 2010, and remains today.

REC is a vibrant force in many markets around the world, and they are a well-known brand in Europe too.

REC has a very low warranty claim rate of 1 panel in 10,000. Few companies, can boast of such a low rate. What's also impressive is REC’s ongoing commitment to after sales service. REC Solar also have an office in Melbourne too.