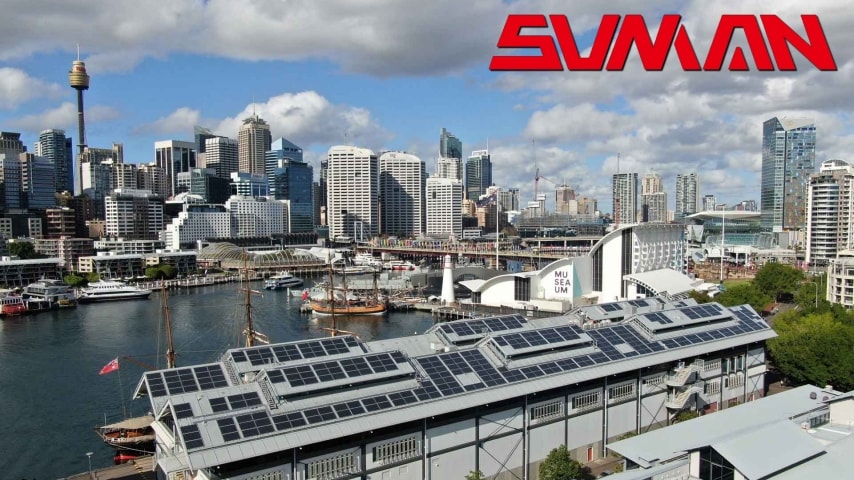 T here are many places, where due to their size, shape or weight “normal” solar panels will not suit. Recently, the man behind solar firm, Suntech, has put his talents towards lightweight solar panels. He created the “eArche” solar panel weighing about a third of a “normal” panel, but having the same output.

The first install of the eArche panel was the Byron Bay Railway. This in fact was the world’s first, 100% solar driven railway. Now the roof of the Australian National Maritime Museum’s Heritage Centre has the biggest lightweight solar panel system in Australia. Energus, a division of SunMan Energy, did the install using the innovative light, flexible panels.

ARENA made a $6.6M investment to develop the “eArche” idea by SunMan Energy – the parent of Energus.

eArche has a new lightweight, flexible solar panel technology, made in fact from a polymer composite material.

eArche is a glass free PV solar panel that you can fit on any surface which includes curved surfaces. Roofs that can’t take weight can most likely use the eArche solution as it is 70% lighter. But the panel can still make the same power.

The latest install is a 235 kW array of 812 panels at the Maritime Museum building in Darling Harbour. In fact Wharf 7 of the Maritime Heritage Centre. Due to its heritage status and the low load bearing of the roof, ‘normal’ solar panels cannot be used. They expect the new solar array to keep the Museum’s power costs down by about 25%.

Darren Miller the CEO of ARENA said that eArche opens up PV solar tech for a lot of new uses.

“The innovative and versatile solar technology, developed by SunMan, is an alternative that can help bring solar to more buildings. Making it a key part of the overall building process, especially for heritage buildings, and those with curved surfaces.”

SunMan and Energus founder, Dr Zhengrong Shi said: “When I developed eArche, I knew it had great potential. That it could let solar be put on buildings which were before, unable to support glass solar panels. Now with eArche’s low weight, flexible design and outlay, we can apply solar to just about any building design.”

Kevin Sumption, Maritime Museum Director and CEO, says the museum had been exploring solar options for many years. But they found that traditional glass solar panels were too heavy and inflexible. The 5.5kg glass less SunMan panels could provide the same performance as panels that weighed 20kg.