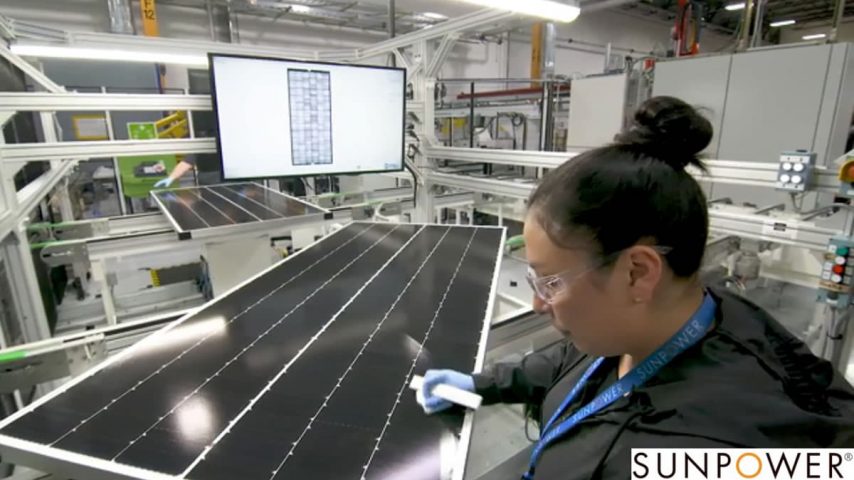 unPower is moving well at its new Oregon plant and has also started to make panels from there. This site was the former Solarworld plant that in fact has had a total refit. The revamp took four months and there are also 200 workers at the site.They are making their “P Series” panel there which also has an efficiency of 19% plus.

The panel uses SunPower’s own ‘shingled’ cell feature that in fact boosts PERC panel output. PERC stands for “Passive Emitter Rear Cell”, a funny term but its currently all the buzz right now. And its very good news so far for the new ‘shingled’ cell, P Series panel. On trial by test body DNV GL for over two years, they also list it as a top performer. It has surely proven itself to be pretty stable.

Tom Werner is SunPower’s CEO and also chairman of the board. The P19 is not only a great panel, but according to Mr Werner, a part of the US solar revival. He also expects the firm to do well meeting market demand with a home grown product.
Since Q1 2018, solar in the US has changed a lot due to much higher tariffs. As a result, US s201 tariffs have had a major impact. They now in fact apply on almost all imported PV panels.

Industry sources say that US solar panel capacity has doubled in 2018 to 4GW from 2GW the year before. Big players like JinkoSolar and also Hanwha Q Cells create more than 2GW of the new 4GW capacity.
LG Solar which is SunPower’s main rival has also built a new 500MW factory in Alabama, US. From there they will also produce the NeON 2 N Series panel for the local market. SunPower is also currently the #1 commercial supplier in the US.