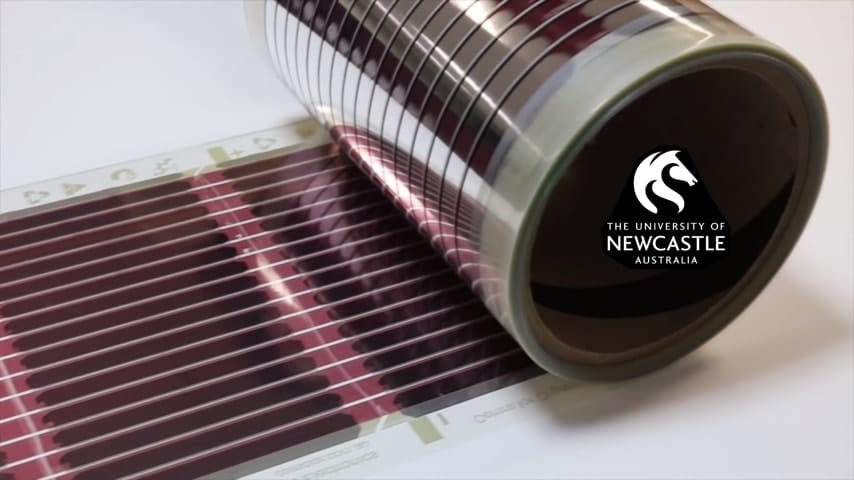 A research team from the University of Newcastle, and partner Brambles report success with printed solar. They reached another milestone in their quest to develop commercially viable printed solar. In 2018, CHEP Australia, a Brambles company, enabled a trial install at CHEP’s Beresfield site. With the success of the pilot program the project, will now move to large scale trials.

The team is led by Professor Paul Dastoor from the University of Newcastle who has nurtured this project from inception.

Organic PV (OPV) is one of the ‘holy grails’ of solar research around the world. Using special inks they can print it onto flexible materials and its easily adhered to surfaces, even with Velcro. So its incredibly light weight and cheap to make too. One of the big problems is low efficiency when compared with normal silicon solar cells. It’s not clear what the current level is now for printed solar, some have said its about 2-3%. But its believed to be higher than that now, but probably still under 10%. Some may not feel that is exciting, but gradual, real progress is ongoing.

As you can imagine, when they solve the efficiency level, this is going to change everything. OPV could be in use on just about anything where people need power. So there’s a wide range of applications for this technology.

Professor Paul Dastoor is from the Centre of Organic Electronics at the University of Newcastle (UON). In fact he is the creator of Printed Solar, and describes how

the concept came to be. He said that the process takes small particles of various polymers, suspends them in water, then applied over large areas.

There is the possibility to coat everything, just about, and turn many surfaces into PV power producers. This is no idle boast as many roofs as such cannot take the weight of ‘normal’ solar panels. So something like this which weighs 300x less, and costing less than $10 per square metre would be ideal.

This is in essence a ‘solar membrane’, that you can make with a standard printer. You are able to print hundreds of metres per day, so it’s the fastest form of renewable energy today. This was one of the key aspects that caught the eye of CHEP management, as something that could be viable.

Indeed, the success of the CHEP trial is just another step up to making printed solar technology a viable reality. We all will be watching to see where it goes from here, but its certainly very promising.