Are highly efficient solar panels worth the money? 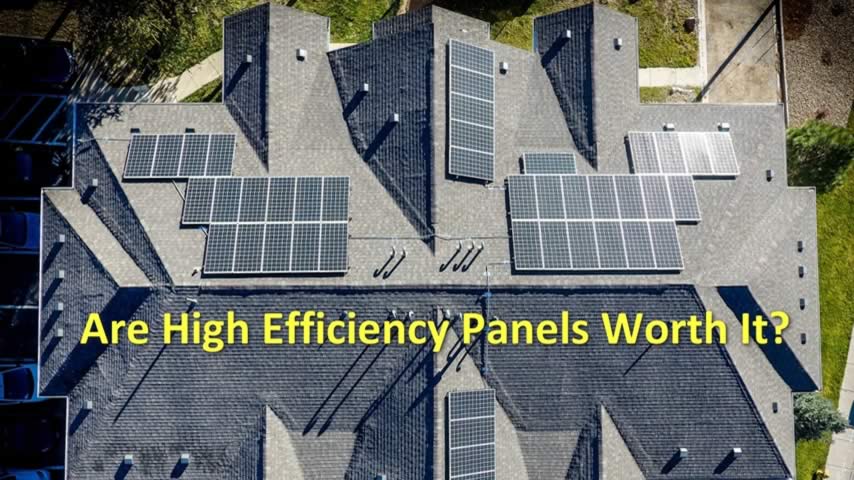 W hen mapping out a solar install, having enough space to put the panels is an ongoing problem. Some roofs are great, so there is no problem in getting what you want up there. So why would having highly efficient solar panels is matter? It’s more of an issue with residential solar than with commercial or solar farm projects. In many cases, on a tight roof, only the highest output panels can really make the effort worthwhile. But there is a price to pay for that, so buyers need to be careful.

How efficient are solar panels?

While most solar panels now have about 19.5 to 20.5% efficiency, those in the higher groups like the HJT panels, put out 19.9% up to 21.7%. Those at the top end, such as brands like LG Solar and SunPower, report levels to 22.7%. It’s easy to see that you get more power from these panels, but you can rely on them more too. They carry very long warranties, so they cover your investment better if a problem arises. But mid-level panels have now made up quite a lot of ground in every respect. So, potential buyers need to wonder if it’s really worthwhile to go for the top end or not.

It’s a fact that many people move home every few years. So, it doesn't make sense to invest in a system that will take a long time to pay off. What a lot of buyers don’t know, is that their warranty is not transferable to the new owner of the home that they just sold. This is something that you will need to check while talking to the sales person. Most will not even know, and will have to go away and find out.

Some panel makers increase output in a number of ways. Some don’t use bus bars or ribbon connectors at all and push the cells closer together, reducing dead space between them. This helps gain more power and output. Both SunPower and LG use back contact technology. Which routes all electrical contacts to the back of the cell. This gives more space on the front of the cell, to grab more light energy and increase the solar panel efficiency. Panasonic uses 13cm solar cells instead of 158cm cells (that are more common in the industry). This allows them to use 96 cells in the same area as a ‘normal’ 60 cell panel. As we’ve found out, a smaller cell can be a bit more reliable. They suffer less from issues that can occur in transit like micro cracks, which can harm output over time by interrupting the flow of power through the cell.

Very-High efficiency panels won’t always be picked for solar projects though, because space is most times not a problem. They don’t need to pay the extra when they can easily just add a few more panels at less cost. This will likely add up to the same output anyway. Where shade is a problem installing high output efficient solar panels might work out, but an optimized system would probably be better.

Panel failure most often happens after about 10 years in service. By that time, a system would have paid itself down several times and the original owner moved on long ago. If a buyer feels that this home will be their last stop, then it may be worthwhile to go for the premium level panels. If not, it just makes more sense to go for good mid-range panels that have local support, faster payback so you’ll be saving money quicker.