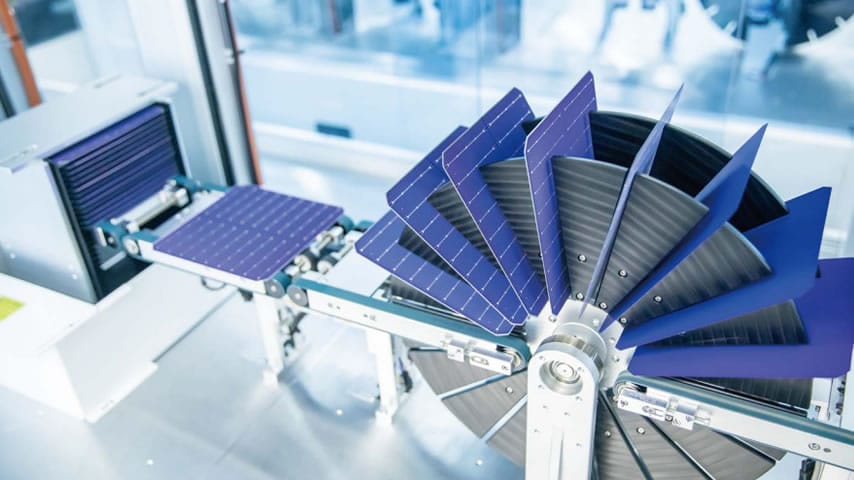 Heterojunction Solar Cells – What are they?

The search for improved solar cell efficiency keeps panel makers looking for new ways to gain extra performance, HJT or Heterojunction solar cells are proving to be very useful in this never-ending quest.

If you’re researching for the best solar panels to put on your roof, it may come as a surprise that there isn’t really that much difference between most of them.

Perhaps if you were looking to buy a new car, you’d expect and know there’s a lot of variation in features between them – size, economy, power, etc. But this is not necessarily the case with solar panels. In the end, there’s really just a few things that sets one apart from the other. The first being of course, very importantly – efficiency. Then there's price, warranty and hot weather performance. Not everyone is looking at the last one, but they should as we’ll discover shortly toward the end of this review.

A solar panel’s efficiency is measured by its ability to convert sunlight to electricity. Greater efficiency yields more electricity from a panel of a specific physical size – surface area. So, on roofs that are tight on space, having a panel that is efficient for its given size is very important. When looking at a panel’s output – make sure to note what the actual size of the panel is.

As we’ve seen over the last few years, panel efficiency has gone up steadily as manufacturer’s find new ways of getting more watts out of the same space. One of those ‘ways’ is HJT. This technology was first developed by Sanyo of Japan, who are now known as Panasonic. It has been used in their “HiT” range of panels for many years. When the patents expired, other makers launched their own versions of it. 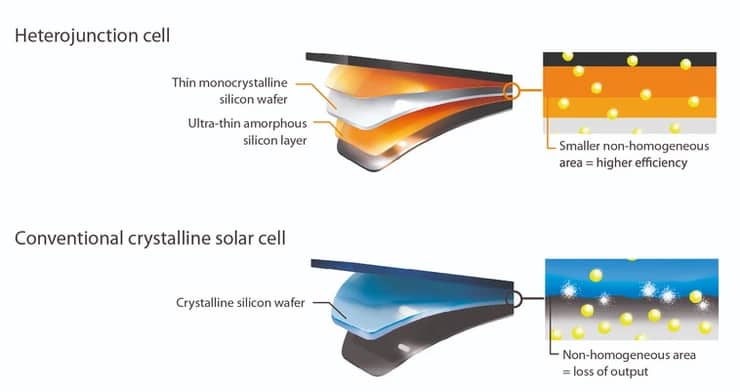 So, how does HJT solar cell work?

In Webster’s Dictionary, the word “hetero” is derived from the Greek word heteros. It means two, opposites. In this case two different types of silicone; “amorphous” and “N”. They are joined as in a “junction”.

It’s a two-in-one. Heterojunction solar cells in fact, merge two different types of technology into the one cell. Where an “N type” silicon wafer is sandwiched between two layers or “thin films” of “amorphous” silicon. When both of these technologies are combined, they produce a better result than if used separately.

Crystalline silicon is the most common type found in solar panels – either multi-(Poly) crystalline or monocrystalline (Mono). Poly crystal was initially more popular due its lower cost, but as demand and production techniques improved, Mono rose to be preferred as it mostly gives better results.

Silicon wafers are sliced from silicon ingots that are formed in special high temperature kilns. Each wafer is an individual cell. This is true of Poly and Mono crystalline silicon. The term, “Amorphous” silicon is also derived from the Greek word, amorphous meaning to “have no specific shape or form”. This type of silicon can be applied to a surface rather than drawing and forming from a hard, uniform crystal ingot. A feature of Amorphous silicon is that it doesn’t have a uniform cell structure, they are in random order. It costs a lot less to produce, but it’s not as effective as Mono or Poly cells. Still, it has other advantages which we will discuss soon.

In a heterojunction solar cells, the “N” or “P” type silicon wafer has both top and bottom surfaces coated with Amorphous silicon as a “thin film”. It’s a silicon sandwich! The purpose of this is to capture as many photons as possible. Just using either silicon type by itself doesn’t work as well. However, by using the two materials in tandem, means that more photons of light can be caught, thereby increasing overall efficiency of the cell. 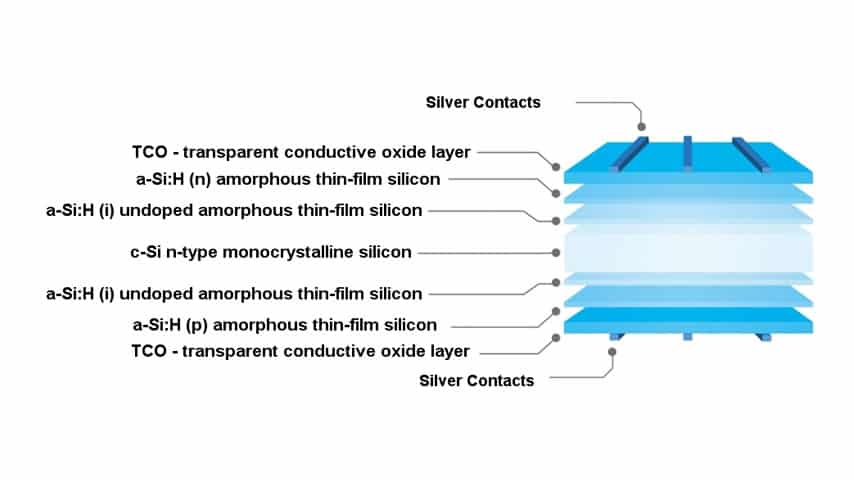 How does heterojunction technology increase efficiency?

An individual solar cell is made up of extremely thin materials that are arranged so they can capture as much sunlight energy as possible that hit their surfaces. Of course, not all of the light that hits the cell’s surface is absorbed. Some is reflected or actually passes right through the cell.

Heterojunction solar cell use a three-layer process to catch as much sunlight energy as possible. The silicon wafer in the middle of the “sandwich”, does the most of the sunlight to electricity conversion.

The top layer of Amorphous silicon that catches some sunlight before it meets the crystalline layer, is the first tier or “net”. The second as we mentioned earlier, is the middle wafer and then there is the bottom or third-tier of Amorphous silicon that further enhances the cell’s ability to grab many photons that would otherwise pass through the cell completely or bounce right out of it. This is a simple, yet unique method to increase efficiency without adding much cost.

So, by creating a solar panel from three layers of different silicon, means the resulting HJT equipped panel can reach high efficiencies of over 21%, when compared to other panels using a conventional technical approach. 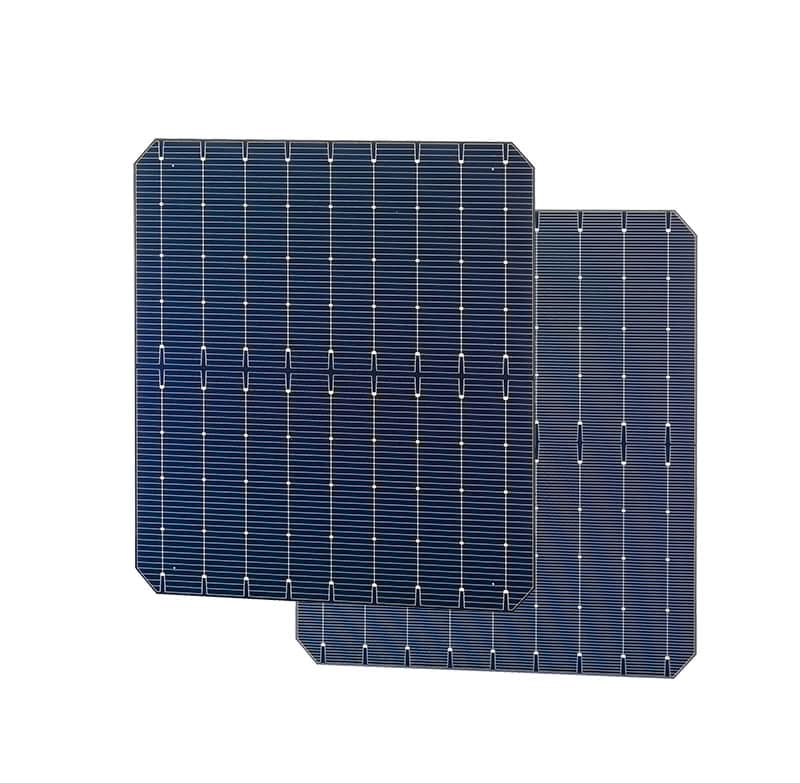 What are the advantages of heterojunction Technology?

Some advantages of HJT cells over traditional crystalline silicon cells are:

The efficiency of HJT panels on the market now ranges from 19.9% up to 21.7% with the latest HJT solar panels arriving from REC Solar and the very respectable 22% Efficiency from Canadian Solar. Although the SunPower Maxeon is the current ‘champion’ with the highest levels at 22.7%. The cost of the Maxeon is a lot higher than other contenders, and outputs up to and over 21.7% are definitely a significant increase over traditional Mono cell products.

The manufacturing cost of producing HJT cells is comparable to PERC cells that are (at the time of writing) the most popular format, like Jinko Solar Mono PERC . Although it’s not nearly efficient as Mono crystalline silicon, when compared, Amorphous silicon is a fairly cheap technology that gives a good result, and is far easier to incorporate into the manufacturing process than other technologies, requiring a lot less steps. This positions HJT technology to be a driving factor in lowering panel costs.

Lastly, HJT panels have an accepted advantage when it comes to high temperature operation. Generally, solar panels are less effective in hot weather temperatures. This is commonly accepted – Panel temperature performance information is listed prominently on the technical datasheets of all solar panels. Look for the temperature coefficient data, CEC, NOCT and PTC power ratings. As mentioned, probably the most impressive feature of HJT cells is their very low temperature coefficient which is about 40% lower when compared to “normal” Poly and Mono crystalline cells.

This is a big advantage that Amorphous silicon has; in that it has a much better ability to cope with hot temperatures than other types of silicon. So, with the two layers of Amorphous silicon enveloping the central “N” type silicon wafer, a HJT panel is able to operate and out-perform rival conventional solar panels as the temperature rises.

The power rating of a solar panel is measured under the STC or Standard Test Conditions protocol. This is measured at a cell temperature of 25°C.

When thinking about your own situation...

it’s worthwhile to take into account your home’s roof, what colour it is, what pitch and orientation it is. And also, what material it’s made of. A lighter coloured roof will often produce lower heat levels than a dark roof. As a rule, when it’s on your roof - a solar cell’s temperature is 20 to 35°C higher than the ambient air temperature. This means an 8-14% reduction in power output.

While you are thinking...What if you able to use the sun and extract water to grow crops in the desert??
Share