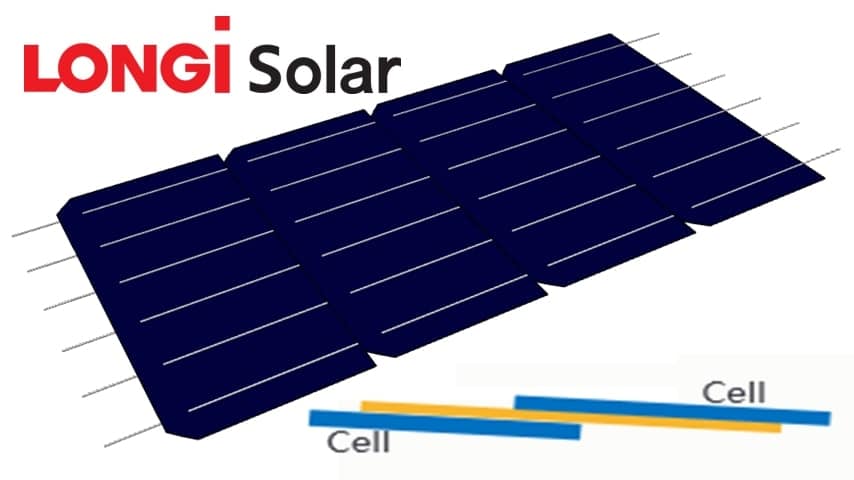 F ast growing Chinese panel maker Longi Solar, gave details about its new ‘seamless soldering” tech, that removes spaces between solar cells. This in fact improves the cells efficiency as power can flow through the cell easier. These gaps are in normal solar panels where the bus bars meet up to join the cells together. It’s an area of inefficiency and potential problems that shows up as the panel ages and degrades.

The seamless soldering method sees the cells over lap each other like tiles do on a roof. Thereby making a continuous connection throughout not just the cell, but the entire panel. Usually, there is a 2mm gap, they can now use that to squeeze a few more cells on the panel. On 30th of May, 2019 ,TÜV SÜD did a test on this new tech with Longi’s advanced mono PERC. This test revealed that the record for module power could in fact get up to 500 watts soon. They hope to have panels on the market with this new feature by the end of 2019.

Longi says that the new technique is very easy to produce and scale up quickly. It fits in perfectly with their existing M6 mono silicon wafers, and all connecting devices. Longi has been careful to research while applying for patents for its seamless soldering methods.

Recently Canadian Solar also released a module series with a similar, “shingled” design. The high density mono PERC or HiDM. This is an all black panel with overlapping cells that eliminate the gaps between the cells. Sounds very much like the Longi concept? These panels have reached up to 410 watts for the 72 cell model, and 330 watts for the 60 cell. They have an efficiency level of 19.9%.

It will be interesting to see if new patent wars erupt too as a result. In the last couple of years QCELLS has launched a legal stoush with its main rivals, Jinko, REC and Longi. This is over rights to PERC technology. It’s quite possible that “shingled” technology could end up embroiled the same way.