What is PERC solar panel?

The acronym “PERC” stands for “passivated emitter with rear contact” or “rear cell”. PERC solar panels are constructed with PERC cells, which have an extra layer on the back of the conventional solar cells. This added layer lets more sunlight to be caught and converted into electricity. This is what makes PERC cells more efficient than conventional cells. PERC panels are also able to reduce rear recombination and deter longer wavelengths of light from becoming troublesome heat, that badly affect the cell’s performance. Although PERC technology has been around since 1989, it ran into trouble with increased Light Induced Degradation (LID), so commercial implementation was held back until new ways were found to tackle the problem.

However, with steady improvements over time, PERC modules have now reached an efficiency that is in fact 1% higher than that of conventional modules. Given that a typical module has an efficiency rate of about 20%, a system using PERC panels will have about 5% more energy output than the same system using standard modules, all other factors being equal.

In situations where roof space is limited, or there is a shading problem, high efficiency PERC panels can be a cost-effective solution. As they say, “every little bit helps…” This is definitely the case with PERC panels. Even if roof space isn’t a problem, there can be savings made in materials and labour. This is because often where 20 standard panels might otherwise be installed, using PERC panels, you might only need 18 or less to get the same output.

PERC solar panels like Canadian Solar, LONGi, Seraphim or JA Solar have become popular in the market, but what actually is PERC cell technology, and what advantages does it give? To get a better understanding of what PERC cell technology means, let’s firstly take a look at some known issues with standard silicon solar panels. A conventional solar panel cell is comprised of two layers of silicon, one is called “N-type” and the other, “P-type”. This is because they emit a Negative or Positive charge.

At atomic level, which is so small you can’t see and can only imagine it - When sunlight hits a solar cell, the light energy affects the N-type silicon molecules, knocking their electrons free – these are picked up by the P-type molecules. When this happens, this flow of electrons (ions) forms an electrical current. You have electricity! 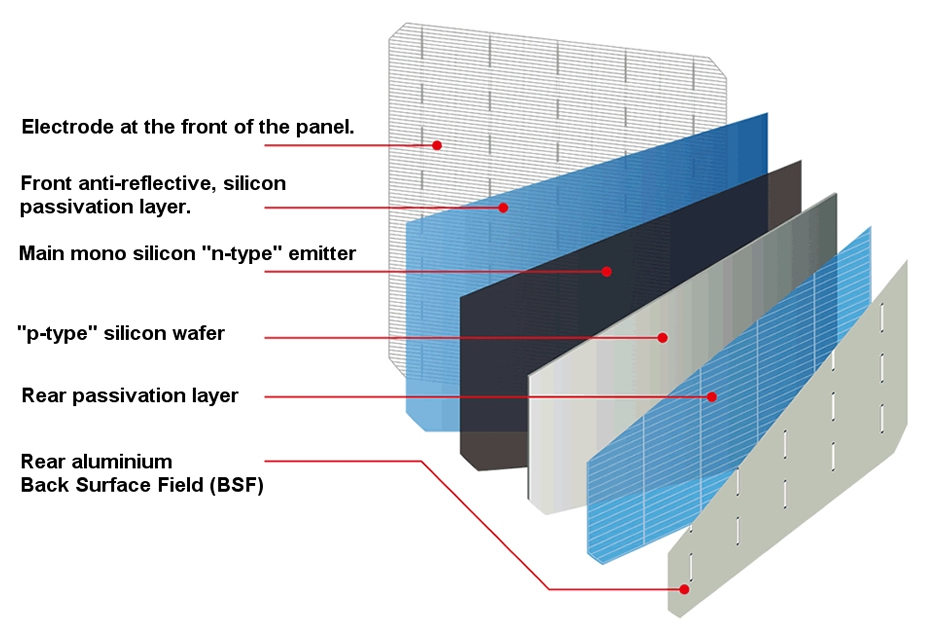 Unfortunately, conventional silicon solar cells suffer from a few issues affecting their efficiency. Firstly, there are losses that come from inefficiencies when capturing sunlight; the solar cell itself can reflect sunlight, the light can be blocked by wires, or many times, it will go all the way through the cell to the back of it. When it does that it creates heat, which is the enemy of cell efficiency.

Another way losses occur is from the random movement of electrons, that have been knocked loose by the light energy. These ‘loose units” often recombine with the original silicon material on the front and rear of the solar cell. Many times, they miss going through the circuit entirely.

Fortunately, some efficiency losses can be reduced by technology. As an example, adding a front passivation layer eliminates front-side recombination, and stops some reflection. To prevent unwanted electron movement that goes straight through the cell to the back contact, a back surface field layer can be added, or all the wires within the cell, can be placed on the rear of the panel during its production. The two fiddly inefficiencies to reduce is the conversion of sunlight to heat in the back of the panel and rear-side recombination of electrons.

Many silicon modules have layers of material that help prevent losses; the front layer lowers reflection losses and also helps prevent electrons being lost on the front level of the cell. The back surface field at the rear of the cell, pushes back electrons, limiting the number that can make it to the rear contact. 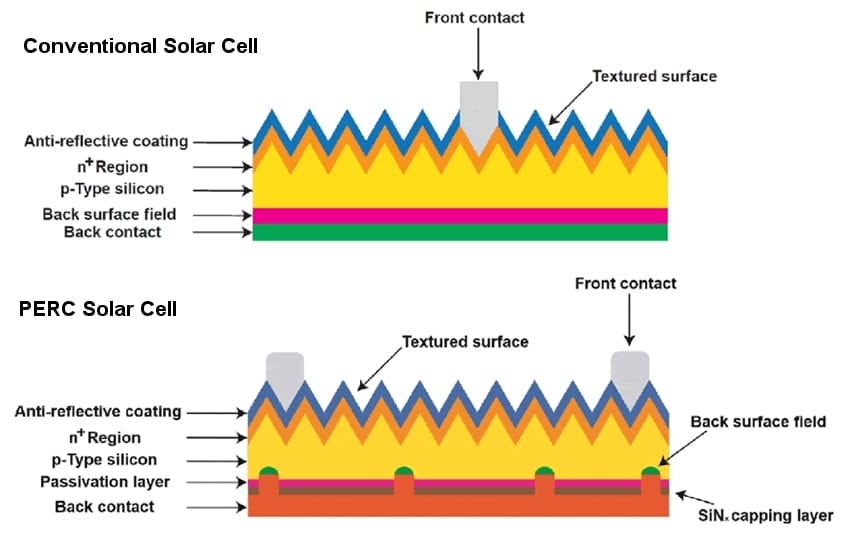 In the first diagram, sunlight energy hits the cell surface of a conventional solar cell and penetrates to the silicone layers inside. Some light is converted to power. However, some light reaches the back of the cell (the green area) where instead of being converted to electricity,it is turned to heat.

The second diagram, shows a PERC cell, where light enters the cell where it is prevented from reflecting out of the front of the cell, and is slowed from reaching the back contact. With a PERC cell, more light is converted to electricity, and less heat is generated by light that did not convert to power.

PERC solar panels are essentially fairly similar in construction to other silicon panels on the market. This is a definite advantage for panel manufacturers.

Although there are extra production costs involved to add passivation and rear contact layers to their panels, producers can often re-tool existing production equipment fairly easily.

Industry sources such as the NREL, say that it’s about the same cost per watt to build a standard or a PERC panel now. The improvements in power rating and higher efficiency make up for any slight differences 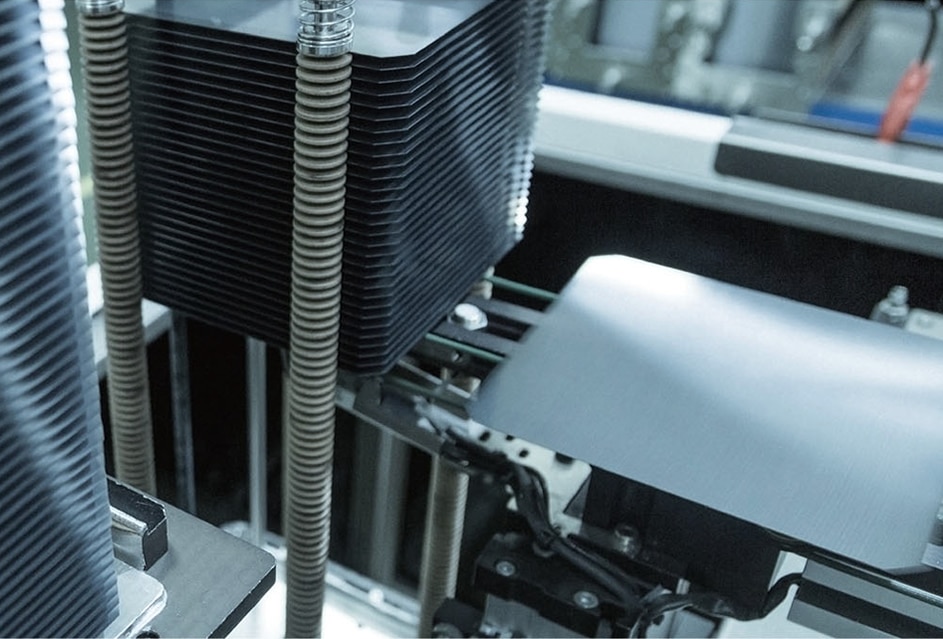 Monocrystalline solar cells are actually cut from a single ingot of drawn silicon, this makes them more efficient than polycrystalline cells, that don’t have the same uniform structural arrangement. PERC layers can be added for increased efficiency too.

Polycrystalline cells are a mixture of random silicon pieces or shards. They are less efficient, but also have a lower price than mono cells. As with mono cells, by adding a PERC layer to them, it can significantly increase a poly cell’s efficiency. However, given the relative cost of mono panels now, in comparison, it’s rare to find many poly PERC panels available.

The worldwide global demand for mono PERC panels has rapidly increased in a fairly short time span. Only in 2014, mono PERC panel production was less than 1 GW annually, and then shot up to 64 GW in 2018. The current forecast sees production reaching 168 GW by 2022. So, by all reckoning, it’s reasonable to expect that PERC- based modules to dominate in the foreseeable years ahead.

Did you know that solar panels are able to produce water too? - Clever Solar Plant Extracts Water
Share