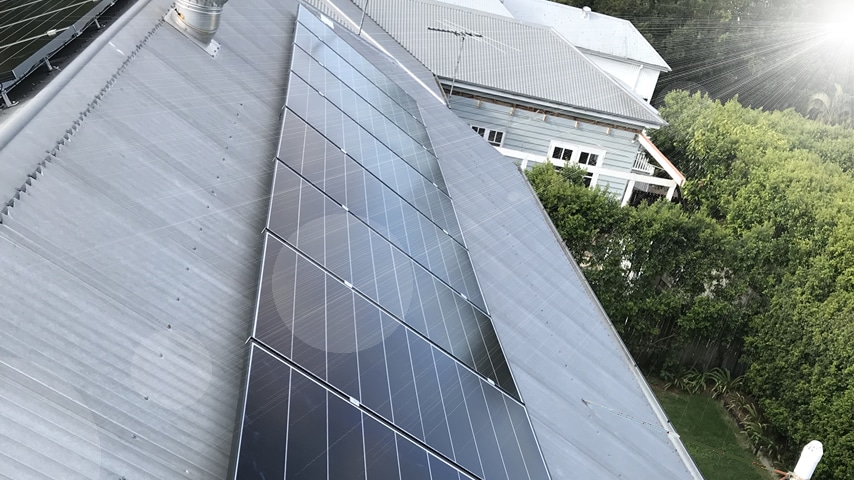 Shingled or overlapping cells is an area where several rival producers are attempting, with some success to increase the efficiency of their solar panels. There are a few identifiable types that have emerged. The object of this approach is to fully utilise the available surface area on the solar panel. In almost every instance, a normal, full-sized solar cell is sliced up into strips. Some cut them into 3, 4 or 5 segments. These can be arranged either horizontally or vertically over the panel surface.

On standard solar panels, the areas that actually produce power from sunlight are interrupted by the silver metal strips that run both across and vertically, through the panel. These are the busbars and finger connecting wires that carry the panel’s charge.
With present day technology and form factor, you can hardly do away with them, and still have a functioning panel. So what developers are doing is moving these necessary but light blocking obstacles, to the rear, to the back of the solar cell.

Getting rid or reducing the space between solar cells is another avenue being used to get as much productive space on the front of the panel as possible. 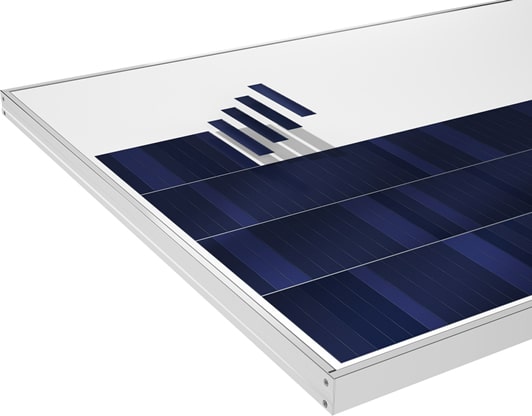 solar cell is sliced up into strips - Source: SunPower

In all cases these approaches are different but at the same time they are very similar. They all use an overlapping design where the edge of one cell is sitting either over or under the cell next to it. The easiest way to explain by way of an example is that of a tiled roof on a home. One tile sits over the edge of the next tile. So even though each tile is a separate unit, collectively they all join together to form a single surface that uses gravity to allow rain water to run down its surface, from the tile on the top row to the one down the bottom.

With overlapping solar cells, instead of water using gravity as propulsion as noted with roof tiles, it’s the attraction of negative ions

to the positive, that forms a stream or current through the panel. It’s a more efficient way of allowing the individual cells join up with minimal gaps and nothing blocking inbound sunlight. So, solar panels constructed in such a way have a more uniform appearance where almost all the visible surface of the panel is capable of converting sunlight into electricity. Some techniques don’t totally remove everything, and some busbars are still present, but significantly less than a standard type of panel. 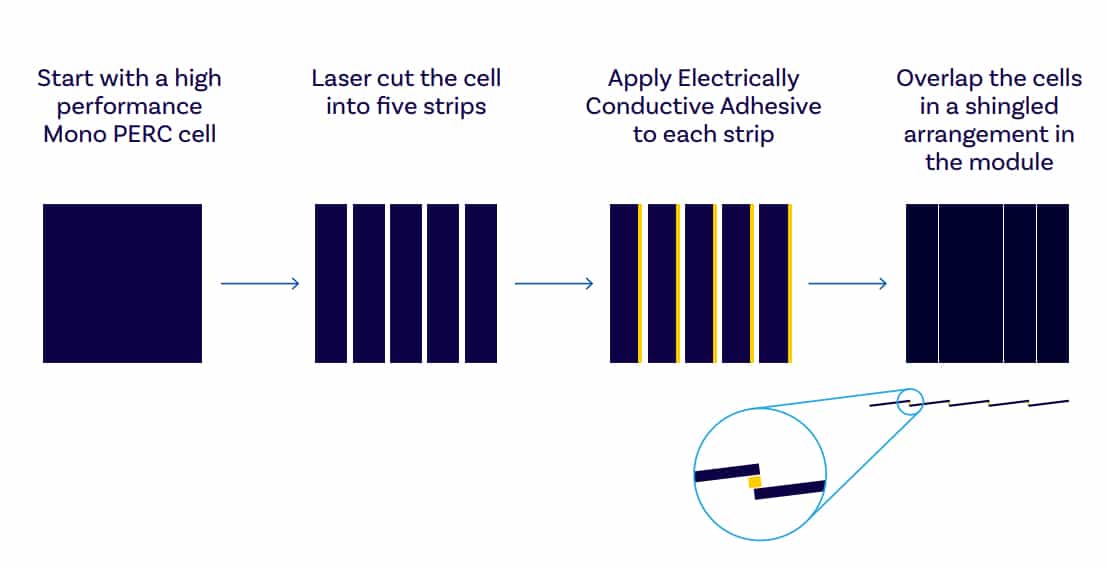 One of the various manufacturing techniques is known as “shingled cells”. There are a few companies that have taken this route. The laser cut cell strips are assembled, layering them in a shingle or roof tile configuration. The underside edges of each strip have a line of connection adhesive that runs the entire length of the cell. It’s the slight overlap of each cell strip that actually hides a single, interconnecting busbar which joins up the cell strips. As mentioned, this design covers more of the panel’s surface area as the front side busbar connections which can partially shade the cell are taken to the back of the cell, and are not in view.

Another feature is that shingled strip cells are often connected in parallel which vastly lowers the effects of shading with each strip cell effectively working independently from the others. Another plus is that, shingled cells are relatively inexpensive to produce, so they can be quite a cost-effective and high-performance solution, especially if partial shading is a problem.

Hyundai Solar was one of the first manufacturers to release shingled cell panels with their high-performance UF Series M3+ PERC range of panels. Another is the SunPower P series which is designed primarily for large scale commercial and utility projects.

Many panel makers are exploring new ways to get rid of the gaps that run vertically between the cells. Eliminating the typical vertical 2-3mm gaps between cells results in greater total panel surface area that’s able to absorb sunlight and in turn, generate more power which produces higher overall panel efficiency. This may seem like a relatively simple change but the small gap gives space for the busbars to flex and inter-join the cells from the front of one cell to the rear side of the next cell.

There are several methods being employed to lower or remove the inter-cell gap with the most popular being to just reduce the space from about 2mm down to 0.5mm, this is because you still must have some gap there for the inter-cell busbar connection. As is the case with large ribbon-type busbars they must have a few millimetres gap to allow them to flex between the rear and front of the cell. However, the move to using much smaller sized multi-busbars has allowed the space to lower even further.

Industry giant Jinko Solar have taken a slightly different path and developed what they call “Tiling Ribbon” technology (TR). The cell strips still overlap each other but instead of using an electrically conductive adhesive to join the cells together, what Jinko have done is develop a compression method to join the cells together. One of the great benefits of this is it greatly reduces the amount of silver solder needed, lowering costs and better environmentally. 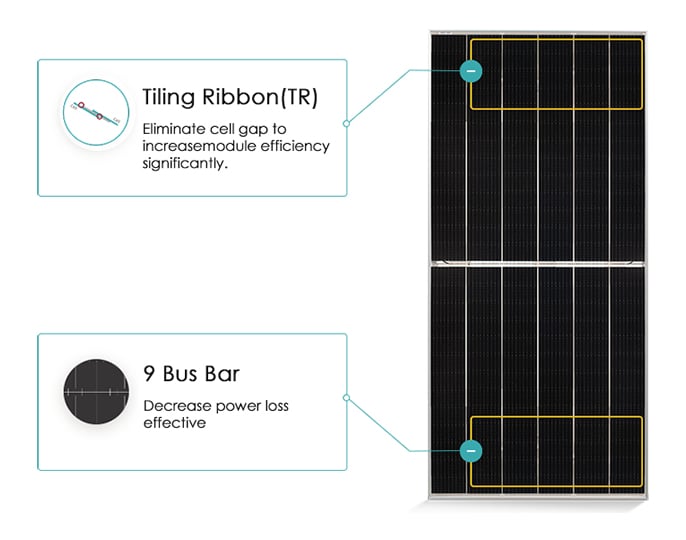 The effort to reduce wasted space n solar panels and elevate efficiency continues. German research institute Fraunhofer ISE and specialised equipment maker M10 Industries have come up with a design that promises to lift solar panel efficiency by another 2 to 6% over standard half-cut solar panels.

Matrix Shingle Technology (MST), is seen here on the right side of the image The current shingle cell method already improves efficiency by lowering current. Solar cells overlap each other and are connected using special conductive adhesives.

The Fraunhofer method resembles “bricks in a wall” when viewing the panel face on. The offset design layout takes the shingling approach to the next level. There are improvements over rival methods when used in partial shading situations where the close packing of the cells helps the flow of generated power move around the panel even better. 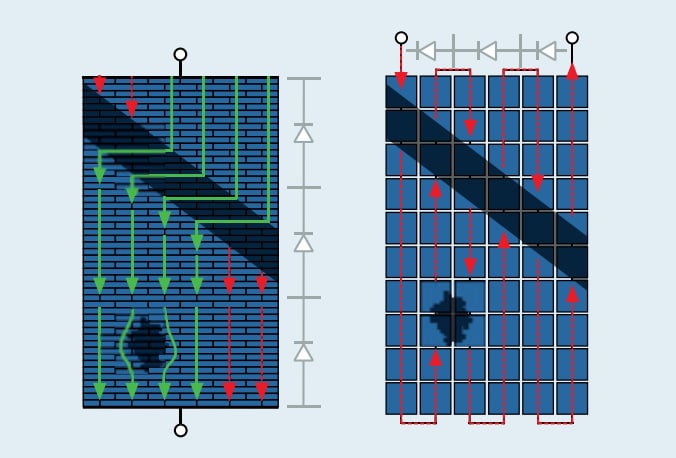